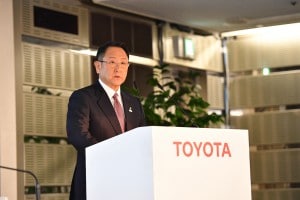 CEO Akio Toyoda says expanding the ties with Subaru is a once-in-a-century transformation.

Toyota is putting a bigger embrace around Subaru, Japan’s largest automaker confirming the two manufacturers will work together on new versions of their jointly developed sports cars, while also expanding its holdings in the company that used to be known as Fuji Heavy Industries.

It’s the latest in a series of moves by Toyota to team up with both Japanese and European automakers on a variety of different projects, many aimed at the development of future technologies like battery-cars and autonomous driving.

“During this once-in-a-century period of profound transformation, driving enjoyment will remain an inherent part of automobiles and is something that I think we must continue to strongly preserve,” said Toyota CEO Akio Toyoda, referencing the plan to develop new versions of the Toyota 86 and Subaru BRZ sports cars.

(Toyota Teaming Up With Mazda on I6 SkyActiv Engine)

As part of their expanded alliance, Toyota also plans to increase its current stake in Subaru from 17% to 20% at a cost of around $700 million, while the smaller manufacturer will, for the first time, make a modest investment in Toyota. 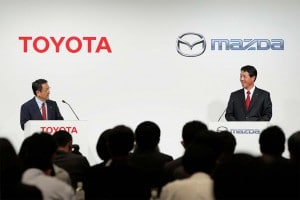 The two companies, which first partnered in 2005, will work together on new all-wheel-drive models, they announced, a key strength of the Subaru brand. They also plan to work together on next-generation technologies which are likely to include electrified and autonomous driving.

Toyota is a major player in hybrids, having launched the Prius as one of the world’s first gas-electric models, while Subaru remains a laggard in the field.

Subaru could also assist Toyota by providing it with technologies such as its i-Sight advanced driver assistance system.

With the expanded stake, Toyota will be able to add some of Subaru’s profits to its own balance sheet – about $463 million based on anticipated earnings for the current fiscal year, according to Janet Lewis, an analyst at Macquarie Capital. And it will be able to count some of the smaller maker’s sales which totaled around 1 million vehicles in 2018. That could help Toyota, which sold 10.6 million vehicles last year, regain the global automotive sales crown in a tight race with rivals Volkswagen and the Renault-Nissan-Mitsubishi Alliance.

The expanded alliance with Subaru “is part of Toyota’s recent efforts to find allies,” Tatsuo Yoshida, auto analyst at Bloomberg Intelligence said. “They’re getting ready for the next era that includes self-driving technology. Toyota is taking a 360-degree view.”

Just a month ago, the giant automaker announced it was acquiring a 4.94% stake in Suzuki for 96 billion yen, or $910 million. In turn, the smaller automaker said it would purchase 0.2% of Toyota’s outstanding shares for 48 billion yen, or about $455 million.

Toyota also holds a 5% stake in Mazda while the Hiroshima-based automaker has a 0.25% holding in the bigger 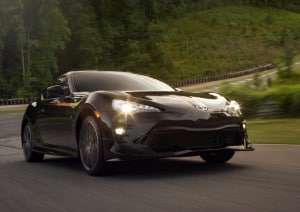 Toyota and Subaru are developing a new version of their joint platform sports cars: the Toyota 86 and Subaru BRZ.

company. That alliance was formed in August 2017 and helped Mazda find a deep-pocket partner after having lost the help of its long-time ally Ford Motor Co. earlier in the decade.

While most of its partnership are centered within the Japanese auto industry, Toyota also formed an alliance with Germany’s BMW to jointly develop a pair of high-performance sports cars, the Toyota Supra and the BMW Z4.

And it has allies outside the traditional automotive market, including Uber. Toyota announced in August last year that it would invest $500 million in the ride-sharing giant, an alliance focused on the development of autonomous vehicles.

The push to bring autonomous and electrified vehicles to market plays an important role in many of the moves that CEO Toyoda has authorized in recent years. That included a short-lived deal with Tesla formed in 2010. They ended their partnership six years later.