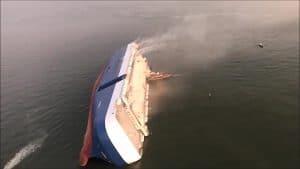 The Golden Ray is blocking the entrance to the Port of Brunswick, one of the busiest ports in the U.S.

The busy port that is a key destination for car being imported into the United States just accepted its first ship after a freighter designed specifically to transport cars and trucks capsized in the main channel leading to the Port of Brunswick, south of Savannah, Georgia.

The U.S. Coast Guard and salvage experts succeeded earlier in rescuing the last four crewmen trapped aboard The Golden Ray, which rolled over in the main shipping channel Sept. 8. All 23 crewmen aboard the Golden Ray, which is operated by Hyundai Glovis, are now accounted for after the dramatic and technically challenging rescue.

Norm Witt, commanding officer at Coast Guard Marine Safety Unit Savannah, told reporters that getting the 656-foot ship out of channel will be a major challenge.

“This is a complex case,” Witt told reporters. “We have salvage to deal with on a large vessel. We have pollution mitigation efforts ongoing and some waterways and port operations issues, as well.”

Witt warned that the full operation of securing and removing the Golden Ray could take months.

The Golden Ray is a “RoRo,” a type of ship that allows vehicles to be driven on and off for transport.

“I would say that each step of the way, we’re continuing to redefine those plans as we learn more about the condition of the ship and trying to make sure that our processes are as safe and effective as possible,” he said. “This is definitely something that we want to get right the first time,” he said.

The Port of Brunswick, about 70 miles south of Savannah, remained closed Tuesday. It’s the second-busiest automobile port in the country after the Port of Los Angeles – Long Beach in Southern California, which has traditionally been the destination for vehicles exported from East Asia.

However, the widening of the Panama Canal and an aggressive sales campaign by officials in Southeastern United States, who promote their ports are less expensive than ports on the West Coast have increased the competition.

In the fiscal year that ended June 30, more than 613,000 vehicles and heavy machinery units moved across its docks, according to the Georgia Ports Authority.

Witt said Tuesday that the earliest the port could reopen to limited one-way traffic would be Sept. 12 — and he stressed that that was a “very aggressive goal.”

“There’s a lot of things that may cause us to shift that timeline further down the road,” he said.

The NTSB has assigned two investigators, but the Coast Guard will lead the probe into what happened on board the ship when it rolled. No timeline for answers has been provided. 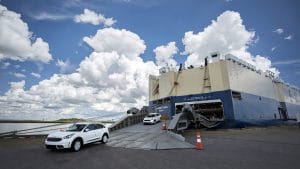 The Port of Brunswick is the second busiest “RoRo” port in the United States.

However, experts speculated that it’s unlikely the ship took on water suddenly from a hole in its hull and then capsized since it was in the middle of well-marked channel that is regularly dredged.

It’s possible, but presently considered unlikely, that the ship’s cargo of Hyundai- and Kia-brand vehicles could have shifted, causing the ship to capsize.

The Golden Ray is what is known in the trade as a “RoRo” – a roll on, roll off ship designed with massive doors so cars and trucks can be driven on and off. It’s also relatively new, having been launched in 2017.

Experts speculate that one of the ships big doors wasn’t secured properly, causing the ship to take on water suddenly in its main cargo compartments.