Nissan CEO Admits to Getting Overpaid, Benefitted From Program that Led to Ouster of Ghosn

Nissan CEO Hiroto Saikawa plans to repay the automaker for about $440,000 in excess payments.

In an embarrassing twist in an ongoing corruption scandal, Nissan CEO Hiroto Saikawa has acknowledged he was overpaid to the tune of tens of millions of yen.

The payments were the result of an equity remuneration scheme run by Nissan that, said Saikawa, was “created under the leadership of (Carlos) Ghosn.” Excess pay for the now-ousted Nissan Chairman led to Ghosn’s arrest last November in a scandal that has continued to haunt Japan’s second-largest automaker.

While Saikawa insisted he was not aware of the problem, telling reporters, “I thought the procedures were handled properly and I didn’t know” that it was part of the same program that was used to pay his former boss, the news could complicate efforts to process Ghosn.

“Nissan must have known about the improper payment to Saikawa when it conducted its in-house probe into Ghosn,” Junichiro Hironaka, one of the former chairman’s defense lawyers, said Thursday during his own Tokyo news conference. “It turned a blind eye to Saikawa and only went after Ghosn.”

The news could complicate one of the key allegations against former Nissan Chairman Carlos Ghosn.

The then-65-year-old Ghosn was arrested last November, shortly after his corporate jet landed at Tokyo’s Haneda Airport. He was initially accused of receiving unreported income of about $44 million between 2011 and 2015. That figure has since been increased and he has been accused of a series of additional crimes.

Last month, as TheDetroitBureau.com reported, new evidence surfaced suggesting the executive ran an investment operation in Silicon Valley, along with his son, using millions of dollars illegally funneled through one of the automaker’s affiliates in Oman.

(For more on the latest allegations against Ghosn, Click Here.)

Ghosn was detained in the Tokyo Detention Center for about four months before being released on bail. He must follow strict rules, however, that limit his access to not only the Internet but also to his wife and other family members.

Former Nissan executive Greg Kelly – who was arrested along with Ghosn – suggested Saikawa was being overpaid in a Japanese interview in June.

Ghosn has repeatedly denied the charges, as has Greg Kelly, one of his top lieutenants at Nissan, who was arrested alongside Ghosn last November.

In an interview with Kelly published in June by the Japanese magazine Bungei Shunju, the former executive raised concerns about possible excess payments to Saikawa. He also said that Nissan’s current CEO was not only aware of, but had signed off on the additional payments to Ghosn.

The case has spurred intense speculation, some observers questioning whether the charges levied against the former Nissan chairman were part of a company plan to create more distance from alliance partner Renault. Currently, the French automaker holds a controlling stake in Nissan after bailing its partner out in 1999.

Compared to the millions in excess pay allegedly funneled to Ghosn, Saikawa received a far smaller overpayment, about $440,000, according to a report by Japanese broadcaster NHK.

“I apologize for any concerns caused by this,” Saikawa said after the overpayment was reported, “and I believe that the amount that is different from the original registration should be returned to the company. That is my intention.” 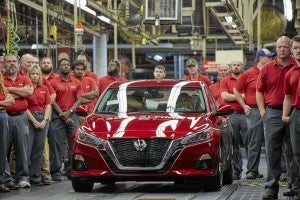 Nissan faces plenty of other problems, including slow sales, and plans to trim production capacity and eliminate 12,500 jobs worldwide.

Other officials who also received excess payments will be required to repay Nissan, as well.

The latest incident comes another body blow to a company beset not only by corruption charges but declining sales and earnings.

The automaker suffered a sharp downturn during the fiscal year that ended March 31, global demand dipping 4.3%, to 5.22 million vehicles, while earnings were off 57%, to 319.1 billion yen, or $2.9 billion. But the new fiscal year – which continues through March 31, 2020, has gotten off to an even worse start. Analysts had expected Nissan to deliver earnings of about $1.6 billion for the April-June quarter. Instead, the numbers came in at a meager $59 million, or 6.4 billion yen, down from 115.8 billion yen during the first fiscal quarter of 2018.

The automaker has launched a downsizing program that will not only see it trim its model count and production capacity by 10% over the next three years, but also reduce its global workforce by 12,500.