Battle about emissions rollback ramping up. 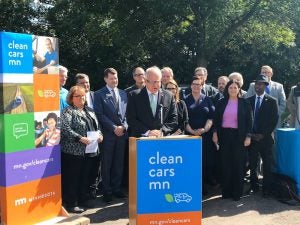 Minnesota Governor Tim Waltz has announced that his state will adopt the strict emissions and mileage mandates set by California, echoing a decision taken by New Mexico officials just the day before.

The two separate announcements mean that there will be 16 states – including the District of Columbia – adopting rules that are stricter than those set by Washington. But there’s a problem.

Last Thursday, the Trump Administration announced that it was eliminating the waiver to the Clean Air Act that allowed California’s Air Resources Board, or CARB, to regulate greenhouse gases, as well as other pollutants like ozone and particulates. Without that waiver, all states have to follow looser federal mileage and emissions rules.

“No state has the authority to opt out of the nation’s rules, and no state has the right to impose its policies on the rest of the country,” U.S. Department of Transportation Secretary Elaine Chao said during a Washington, D.C. news conference.

The Trump administration described the move to cut the CARB waiver as a first step. In the coming weeks it also plans to announce revisions to the Corporate Average Fuel Economy, or CAFE, standards set under the Obama administration to reach 54.5 miles per gallon by 2025.

The final rollback is expected to be less aggressive than had been previewed last year by the DOT and the Environmental Protection Agency, both of which jointly regulate federal mileage standards. But critics have already announced plans to fight whatever is put in place by the White House.

The legal battle is already underway, in fact.

“Mr. President, we’ll see you in court,” Attorney General Xavier Becerra in a statement said last Friday, as California joined 22 other states – including some that have not adopted the CARB mandate – suing to block the White House from lifting the California waiver. Los Angeles and New York City also signed on.

Last Thursday, administration lawyers said they were confident they could prevail in court – in part by the decision to separate the moves eliminating the California waiver and a rollback of CAFE. But others question whether the legal battle might stretch on, perhaps extending beyond the 2020 presidential election.

As a result, a number of auto industry officials TheDetroitBureau.com has spoken to suggest that they will be watching and waiting to see how things play out before reacting. 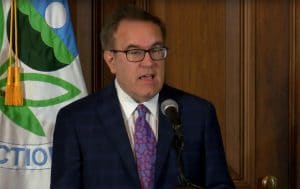 EPA Administrator Andrew Wheeler argues that the CAFE changes will get cleaner, safer cars onto the road faster than under the Obama rules.

“We’re not changing our strategy,” Art St. Cyr, vice president of automotive operations for American Honda, said last week during a Detroit media unveiling of the Honda CR-V Hybrid, the automaker’s first gas-electric SUV. American Honda’s parent company wants two-thirds of its global sales to come from “electrified” vehicles over the coming decade, the CR-V Hybrid just one of the new models on the way.

Honda was one of four automakers – the others being Ford, BMW and Volkswagen – to announce an agreement with California this past July that would only slightly roll back the targets set by the California emissions and mileage mandate.

Others, notably including Mercedes-Benz, were widely expected to join in, according to David Cole, director-emeritus of the Center for Automotive Research – at least until the U.S. Justice Dept. announced it was launching an antitrust probe looking at the four initial automakers that entered into the agreement.

While automakers have sought a single national standard – even if it meant going with California’s – and some easing of mileage standards, they also recognize there is strong support for increasing mileage.

One survey, released by Consumers Union last month, found 88% of American adults demanding improved mileage for all classes of vehicles. Even among buyers of the biggest vehicles on the road, like full-size pickups, the figure was 73%.

Perhaps more importantly, “Certainty is what we crave,” Ford President Joe Hinrichs told TheDetroitBureau.com earlier this year. The industry would simply like to have clear standards in place, he and others agree, even if they’re tough ones to meet, so plans can clearly be put in place.

But the lawsuits surrounding the Trump administration’s moves will mean that certainty is something the industry will have to wait for.