GM Gets Heat from Democrats on UAW’s “Solidarity Sunday” 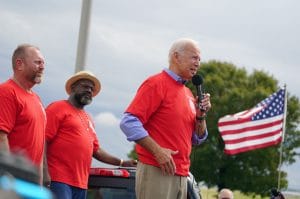 With the UAW’s strike entering the second week, negotiations between the United Auto Workers and General Motors Co. remain stuck in neutral with neither side reporting progress; however, the union brought in some political artillery during the weekend hoping to batter the automaker.

“I don’t think anyone knows if this is going to be a short strike or a long one,” said Harley Shaiken,an expert in labor relations from the University of California – Berkley, adding GM many have underestimated how much importance to place on certain issues such as curtailing the use of temporary workers.

Meanwhile, GM came under a barrage of criticism from Democrats during what the union had billed as “Solidarity Sunday.” 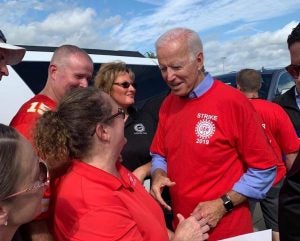 “I am the UAW,” he told the group as they cheered. He spoke about his background with the auto industry and then criticized GM and automakers in general.

“It used to be that if you contributed to the welfare of the corporation you worked for, you got to share in the benefits. If everything went up, you went up too, wages went up, security went up. If it went down, everyone got hurt, labor, everybody across the board. That’s not the deal anymore.”

He added later, “We didn’t bail out GM, the UAW bailed out GM.”

In Michigan, Rep. Andy Levin (D-Michigan), the scion of one of Michigan’s most famous political families – Levin’s father was a Congressman and his uncle Carl was a U.S. Senator – said the UAW was waging the battle against GM to protect middle-class wages and middle-class jobs. “This is a fight for the soul of America,” Levin said.

Democratic Presidential hopeful Elizabeth Warren also visited the UAW picket lines in front of the “Poletown” plant in Detroit, to shake hands and pose for selfies. She didn’t address the crowd of about 250 though her supporters did bring donuts.

“GM made billions of dollars,” Warren told reporters, adding she in complete support of the strikers. “We need a President in the White House that will go out and fight for unions. If (GM) could save a nickel by moving jobs to Mexico or China or doing or anywhere else on earth, they would do it.” 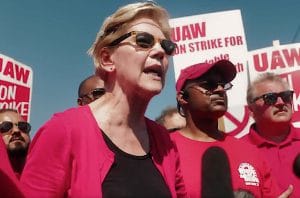 The UAW said the outpouring of support has been incredible: Local residents and businesses have donated food and water to ensure workers are getting a good meal and local and national leaders have stopped by to boost morale and show their solidarity, the union said in a statement.

Last week workers were joined by Senator Amy Klobuchar and Congressman Tim Ryan, both of whom like Warren are seeking the Democratic party’s Presidential nomination we expect Senator Bernie Sanders to join a picket line this week. Former Vice President Joe Biden called local leaders to pledge his support.

The Democratic candidates have expressed support for UAW’s fight for fair wages, affordable quality health care and a defined path to permanent seniority for temps, the union said.

GM officials declined to comment on Warren and Levin’s remarks in front of the company’s Detroit-Hamtramck plant.

Both sides in the contentious strike stepped aside Sunday to allow visits to old Jewish cemetery that is surrounded by the parking lots belong to the GM’s Detroit-Hamtramck assembly plant. 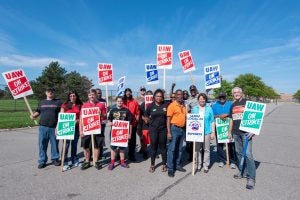 Visitors are allowed in to the Beth-Olem Cemetery, a small green oasis of roughly one acre sitting in the shadow of the plant’s towering powerhouse and walled off from the acres of parking lots around it, only twice a year, in the spring the Sunday before Passover and in the fall, the Sunday before Rosh Hashanah, said James Grey of Farmington Hills, Michigan, who serves as unofficial custodian and historian of the cemetery.

UAW members offered friendly waves as visitors passed through their picket lines and GM security guards guided visitors into the cemetery. “It’s a unique place with a lot of history,” said Grey.

(GM’s Labor Problems Spill Over from U.S. into Mexico)

The last burial in the cemetery took place in 1948 but it still holds more than 1,100 graves and is still visited before holy days by family members. “I keep a bucket of stones by gate for visitors,” said Grey, who said his own great-grandparents are buried in Beth-Olem.