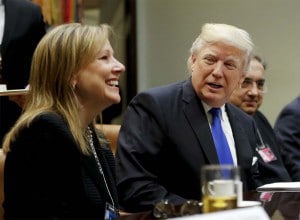 After the meeting, GM officials noted the company’s executive routinely meet with policy makers and Barra herself described the meeting as” productive” while exiting the White House. Beyond that GM had no company, spokesmen said.

Trump has taken to twitter to spell out his concerns in recent weeks. The automobile industry generally, and General Motors specifically, has been among his targets, which ranged from outspoken Democratic opponents, to “Will & Grace” star Deborah Messing and the Mayor of London Sadiq Khan.

In fact, GM has been in Trump’s sights for nearly a year ever since Barra announced plans to close five manufacturing plants, including three in the politically sensitive states of Michigan and Ohio.

“General Motors, which was once the Giant of Detroit, is now one of the smallest auto manufacturers there,” Trump tweeted Friday, a day after Bloomberg News reported GM employed fewer United Auto Workers-represented employees than Ford Motor Co. or Fiat Chrysler Automobiles NV. The president called for GM to “start moving back to America again,” Trump tweeted last week.

GM has tried to mitigate the damage by promising that the displaced workers could retire or shift to jobs at other GM plants. More recently Barra and GM have been promoting a bid by an electric truck maker, Workhorse Group Inc. to buy the Lordstown, Ohio plant.

In May, Workhorse said it was in talks with GM to create a new entity that would purchase Lordstown, which built the Chevrolet Cruze until March, when GM discontinued the car and idled the line. Trump hailed the Workhorse announcement in a tweet.

Workhorse, however, said it generated just $6,000 in sales during the three months ended in June, increasing speculation the start-up company doesn’t have the wherewithal to convert Lordstown to other uses.

Trump also blasted automakers for siding with California in a fight about fuel-economy standards. Ford, BMW and Honda have sided with California. While GM has signed on with pro-California standards, it is unlikely wants to side with Trump against California, which is both the largest and richest automotive market in the U.S.

Trump’s trade war also has weighed on the auto industry. The new NAFTA, which is critical to GM, remains stuck in Congress in a dispute over labor standards. Dan Kildee (D-Michigan) Andy Levin (D-Michigan) and Debbie Dingell (D-Michigan), three Michigan representatives in the U.S. House of Representatives have all told thedetroitbureau.com in recent weeks that they will not support Trump’s proposed U.S. Mexico Canada trade agreement without major revisions to the labor provisions.

Trump also has demanded GM remove its factories from China and build more cars in the U.S. Presumably explained to Trump GM factories in China build vehicles for Chinese not consumers in the U.S.

Trump, however, did have some upbeat news to convey to Barra. Trade talks with China are expected to begin to in October. Automobile-related stocks moved higher after the U.S. and China agreed to hold high-level trade talks in Washington early next month, with some reports indicating real progress could be made.