Forward Into the Past with the Vision Mercedes Simplex 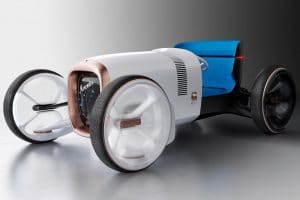 Mercedes-Benz has been rolling out some notably futuristic concept cars in recent times, models like the Vision EQS it debuted at the Frankfurt Motor Show last week. But the new Vision Mercedes Simplex concept gives us a glimpse of the future by looking back at the German automaker’s past.

The show car is an homage to the very first Daimler-Benz model to use the name Mercedes, which was itself a tribute to Mercedes Jellinek, the daughter of Emil Jellinek, a German-born entrepreneur who was one of the earliest – and most successful – of the company’s dealers, operating in the French coastal city of Nice.

Billed by some as “the first modern car,” it won a major European race that convinced automakers that the best layout for a car put the radiator and engine up front while sending power to the back wheels. A production version, the 1901 Mercedes Simplex, essentially became the prototype for the cars we’ve seen ever since.

It also marked a major improvement in the products the German company was selling at the time, which was why the Mercedes name was subsequently badged onto all of its future products. 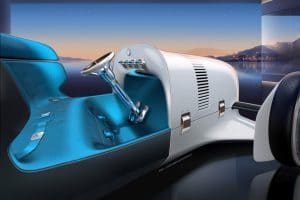 At first glance, the Vision Mercedes Simplex is decidedly retro, but a closer inspection reveals just how much it looks towards the future. Take the “grille.” Set in a classic, rose-gold frame, it is here a video display screen. It projects the original “Mercedes” script, as well as retro take on the brand’s tri-star logo. But it also can be used to advise pedestrians and other motorists with information about the vehicle, such as the direction it is turning.

Under that retro hood, there’s what the German marque describes as an “alternative drive.” We’d love to know exactly what that means but, at least for now, Mercedes is keeping us guessing. Odds are that it is some form of electric propulsion system, however.

The wheels are pushed out to the concept’s four corners. Among the more unusual details: the outer portion of the wheels, with their ultra-low-profile tires, rotate around a fixed center, a bevel gear delivering the power.

Inside, there’s a classic bench seat for two clad in rich cobalt blue upholstery. The steering wheel, meanwhile, is very retro-futuristic, with bottom-hinged pedals framing the steering column. There’s a dearth of knobs, switches and other controls. An 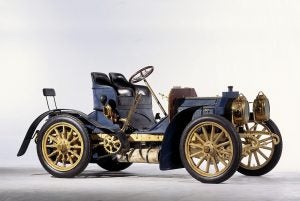 d gauges are projected onto a simple screen atop the dash.

(Mercedes-Benz EQV is a Near Production-Ready Electric Minivan)

Many of Mercedes’ recent concepts offer hints of products to come. The Vision EQS unveiled in Frankfurt last week is thought to be hinting at an all-electric alternative to the S-Class. But don’t expect to see the Vision Mercedes Simplex in showrooms. It is a pure exercise in futuristic nostalgia, a paean to the past that hints of technologies we could see in other Mercedes products going forward.