Ford releases the first videos of its “Mustang-inspired,” all-electric SUV in a bid to address concerns about EVs.

The competitor to the upcoming Tesla Model Y, a heavily camouflaged version of the battery-ute was captured in winter testing, the video released as part of a Ford campaign to address what it called “EV misconceptions. That includes concerns about how electric vehicles perform in extreme cold weather conditions.

Among other things, the automaker said, it has been testing the as yet-unnamed SUV down to temperatures of -40 degrees Fahrenheit. While it showed the electric vehicle operating in extreme cold at Ford’s Smither’s Winter Test Center about 400 miles north of Detroit last winter, the automaker did not reveal specific details, such as the impact on range.

A study released by the AAA early this year indicated that even at just 20 degrees Fahrenheit, electric vehicles tend to see as much as a 47% degradation in their EPA-rated range. 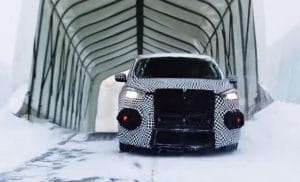 Ford says it has tested the new electric SUV down to -40F.

Ford has a lot riding on the success of the new SUV. While it was an early proponent of hybrid and plug-in power, it has so far marketed only low-range all-electric vehicles that have generated little market demand.

Following a boardroom shake-up in May 2015, however, new CEO Jim Hackett decided to double down on electrification, convincing Ford’s board to authorize an $11 billion investment program. That will yield a number of new PHEVs and BEVs, with the SUV captured in testing being the first of the long-range, all-electric models to come to market. It is expected to debut early next year, with sales set to launch by fall 2020 as a 2021 model.

(Porsche formally lifts the covers on the new Taycan EV. Click Here for more on the new battery sports car.) 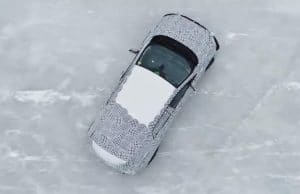 The automaker has committed more than $11 billion to its electrification program.

Where Ford – like mainstream competitors such as General Motors and Nissan – focused primarily on energy efficiency with its early battery-cars, it is shifting direction with the new SUV, as the use of the phrase, “Mustang-inspired,” suggests. While the automaker is still talking about the ute’s environmental benefits, it also is promoting the new model’s performance.

Other automakers have begun taking a similar approach, especially those in the luxury segment. Tesla, in particular, has generated a strong following thanks to the torquey acceleration of products like the Models S, X and Y, as well as their extended range.

The new Ford SUV will also try to match Ford on that front, the automaker suggesting it is aiming for at least 300 miles per charge. 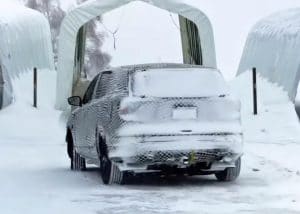 The new Ford EV will reach showrooms in autumn 2020 – by the time a number of other competitors have also come to market.

The new Ford will arrive around the same time as the Tesla Model Y SUV, but both of those will be facing competition from a growing array of long-range electric vehicles. On Wednesday, Porsche officially revealed the production version of its Taycan sports car. Sibling Audi introduced its first long-range model, the e-tron SUV, earlier this year. And parent Volkswagen will show off the production version of its ID.3 electric hatchback at the Frankfurt Motor Show next week. Dozens of long-range models are expected to debut over the next 12 to 18 months.

(VW’s ID.3 one of the big debuts at Frankfurt Motor Show. Click Here for more.)

Even with an $11 billion budget, Ford is looking for ways to leverage its investment. It announced plans to invest $500 million in Michigan-based start-up Rivian last spring and, just months later, announced a new alliance with Volkswagen to share EV R&D and technology. Ford, for one thing, will use the MEB “architecture” that provides the foundation of the VW ID.3 in at least one, and likely several, new models it plans to sell in Europe.

The question is whether buyers will accept the new products. Even with Tesla’s strong sales of the Model 3 battery-sedan, plug-based products still account for barely 2% of the U.S. market. Ford said “education” will be necessary to overcome concerns about EVs, including cold weather operation, performance, range and other issues.

(Click Here to learn more about the electric S-Class concept Mercedes will reveal next week.)