Better mileage – but more power, too. 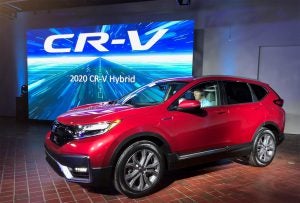 Honda’s CR-V Hybrid has been available in Japan and Europe – but with a different powertrain package.

Honda was one of the pioneers in the hybrid space but, oddly enough, it has been slow to put one of its gas-electric powertrains into a light truck model. Until now, anyway.

True, the Japanese automaker does market a gas-electric version of its wildly popular CR-V in the home Japanese market, as well as Europe. But the 2020 Honda CR-V Hybrid marks the first time one lands in U.S. showrooms.

Those who might be thinking of the original Honda hybrid, the 2000 Insight, could be in for a surprise. While the 2020 CR-V Hybrid won’t be delivering mileage in the 60 to 70 mpg range, it should still impress, according to Art St. Cyr, vice president of automotive operations for American Honda, who said at a Wednesday media briefing, we should see “almost a 50% improvement in city fuel economy,” compared to the conventional gas model.

With its updated 1.5-liter turbo, that version gets CR-V currently gets 27 mpg in the EPA’s city rating, with 33 highway and 29 combined. 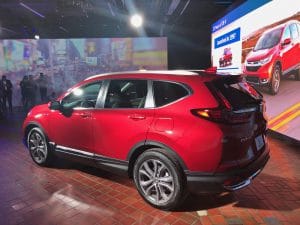 The new CR-V hybrid puts out 212 horsepower compared to the 190 hp for the gas-only model.

·       The new model will be the first Honda hybrid to offer all-wheel-drive;

·       Unlike earlier hybrids, the CR-V was designed to fit its lithium-ion battery below the floorboards, avoiding any loss of passenger or cargo space;

·       And unlike that old Insight, performance should be significant.

The hybrid relies on a 2.0-liter Atkinson-cycle engine paired with two motors, one serving primarily as a starter/generator. But the other adds a lot of punch to the CR-V Hybrid’s powertrain, boosting output to a solid 212 horsepower and 232 pound-feet of torque compared to 190 hp and 179 lb-ft of torque for the gas-powered alternative.

Honda won’t release some useful stats, including EPA mileage ratings, as well as 0-60 times, until early next year, shortly before the 2020 CR-V Hybrid goes on sale. We’ll also have to wait to learn how much range it will yield in all-electric mode, though that’s likely to run just a couple miles, at most. But St. Cyr said the CR-V Hybrid will be able to operate on batteries alone a bit faster than prior Honda HEVs.

Price is another question mark, though the executive acknowledged that with demand for hybrids slipping over the last several years – in part due to low gas prices – it will be difficult to tack on a big premium over the gas version. The latest-generation gas-powered CR-V starts at $24,800, including $990 in delivery fees – an increase of $150 over the outgoing model. 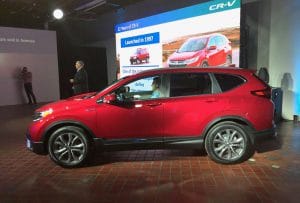 Honda won’t release some useful stats, including EPA mileage ratings, as well as 0-60 times, until next year.

Overall, changes to the 2020 CR-V are relatively modest, starting with a revised grille and LED headlamps, a chromed exhaust, dark chrome trim and, on the Touring model, bigger 19-inch wheels. The Hybrid gets five-LED foglights, a blue Honda badge and, inside, an electronic shifter.

The CR-V may be the first Honda utility vehicle to get a hybrid option, but it won’t be the last, St. Cyr stressed. Expect to see “virtually all our models” offered with some form of electrified drivetrain over the next few years, he said, with the primary emphasis on conventional hybrids. But there will be more and more pure battery-electric vehicles coming, as well. Honda may also offer some plug-in hybrids but, based on consumer reaction so far, the executive said that is going to be a low priority moving forward.

Honda has set a goal of having those various electrified vehicles account for fully two-thirds of its global sales during the coming decade.