Beleaagured EV start up is moving toward production of $200K vehicle. 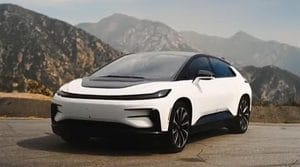 Faraday Future’s FF91 is the EV maker’s first vehicle and will cost $200K.

Faraday Future, the long-struggling start-up electric car company, has taken more than its share of hard knocks in the past four and half years but it still expects to have a new car on the road next year capable of opening up new markets around the world.

It also has succeeded in building a road-worthy prototype for FF91, the first car it hopes to build in its factory in Hannaford, California, which is inching forward in the preparations for the launch next year, according to Carsten Breitfield, the veteran BMW executive and former Byton CEO, who openly acknowledges that he was brought in to give the company a tighter focus and to help find the money needed to keep the company in business.

No prototype is ever perfect but the FF91’s exterior design with its simple, futuristic lines is frozen so the prototype is virtually identical to production car planned by the company, according to Page Beermann, Faraday’s director of design.

Moreover, the FF91 certainly showed promise during a test run through the busy streets of Los Angeles South Bay. In the hands of Faraday’s test driver, it smoothly accelerated from zero to 60 in 3 seconds thanks to the car’s unique propulsion system that produce 1,050 horsepower almost instantly.

The battery, battery pack and inverter on the FF91 are all based on technology engineered in Faraday’s own technical center. The battery’s range is currently pegged at 378 miles and Faraday’s engineers also have worked at cutting down the charging time, believing that charging is replacing range as a barrier for potential buyers of an electric vehicle. 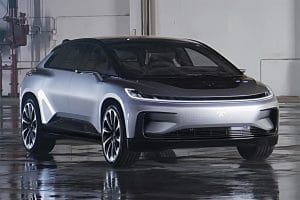 The new FF91 is expected to be on the road next year.

Breitfeld, however, said the FF91 is expected to sell for more than $200,000 or same price range as a Bentley and he expects the initial buyers will have their own drivers, which makes the rear seat critical to the car’s ultimate success.

The rear seat is comfortable and elegant despite the Faraday’s constant need to trim costs and the car also has some impressive user technology, including an app that opens the doors that allows for the elimination of exterior door handles.

The car also was designed with entertainment modules that can be used for streaming shows or news and are expressly designed for the future of automated travel, according to Mattias Aydt, Faraday’s chief engineer.

(Deal with Mobile Gaming Company May Save Faraday Future)

Faraday’s basic platform, which also now been set, is also designed to support other vehicles such as FF81, which the company hopes to bring out after the FF91.

Breifeld noted that fully automated Level Five driving is probably years off. But more limited autonomous driving in specific parts of crowded metropolitan areas such as New York, Los Angeles or Shanghai and Beijing will come sooner, creating the first market for AVs. Vehicles that serve this urban market will have to be unique and offer on board services that ad to the experience, he said. 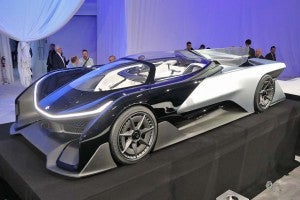 The Faraday Future FF Zero1 concept made its debut at CES Las Vegas.

Faraday was forced to trim its staff last year when it effectively ran out of money. The remaining 300 employees have had their salaries cut – most by 20%. The 20% salary cut, which forced several talented employees to leave, is still in force.

Faraday has obtained some help from its original investors and set up a “supplier trust” through which the claims of creditors are being satisfied. The creation of the trust has meant that key suppliers have continued to work with the company, according to Mike Agosta, Faraday vice president of finance.

(Faraday Future May Have a Future After All)

Breitfeld said he hopes to arrange another $150 million in financing. However, it will take several more months to arrange equity financing.