BMW Concept 4 Brings Future Back to the Present 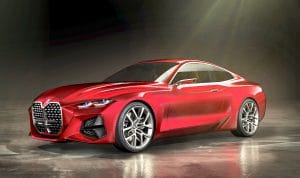 BMW debuted its Concept 4 at the Frankfurt Motor Show providing attendees a glimpse at the company’s design and performance future by looking to fortify its much-beloved past.

The new look is an updated take on the 4 Series line-up. It’s lower to the ground than its predecessors and while it retains the kidney-shaped grille, designers turned it on its end, much like the new version affixed to the new x7 SUV.

Overall, the design exercise is reminiscent of someone who’s “had some work done” by a skilled plastic surgeon — you know what (instead of whom in this case) you’re looking at, but it looks better. The immediate signal of change is the grille.

“The kidney grille has always been a signature feature of BMW cars,” said Domagoj Dukec, head of BMW Design. “The BMW Concept 4 presents a confident and classy take on this iconic feature. At the same time, the BMW Concept 4 offers a look ahead to the expressive face of the 4 Series range.”

While some may think that the vertical kidney-shaped grille is new, it’s really a call back to earlier models like the BMW 2002 or the 328. The distinctive kidney grille, remarkable air intakes and prominently sculpted surfaces provide an immediate advert for the car’s performance and its engaging character as a driver’s car.

However, there is more to that shape than meets the eye. Upon closer examination, one can see that the intricate grating within the kidneys and air intakes, which is made up of an array of small “number 4s” joined together.

The reworked face also includes slim headlights that flow back at an upward angle that give it a distinctive look, almost a confidence — something a 4 Series driver will want to exude when behind the wheel.

The flowing look extends down the sides of the Concept 4 accentuating the car’s long wheelbase and short overhangs. The body is really call back to when BMW’s feature subtle, but masculine-looking panels that gave the vehicle a go-fast look even though it was sitting still.

The rear of the vehicle picks up where the front left off with slim LED tail lights, that part of a broad, sweeping horizontal rear. Again, simple and clean, but design forward in this case. However, it’s not exempt from some modern touches like the aforementioned LEDs, which lend the familiar BMW L shape a cutting-edge “heartbeat” graphic and dispenses with a glass cover.

Their contours underscore the sportingly horizontal focus of the rear end and accentuate its brawny stance on the road. The striking diffuser integrated into the muscular rear apron sets the seal on the car’s rear-end design, officials noted.

Concept 4’s overall look is that of something ready to move and quickly. Part of that comes from the simple, clean lines reminiscent of many of BMW’s past models, but the concept also features some brightwork that gives is a more classic look.