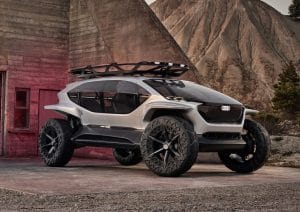 Audi’s ready to go off road but won’t use and gas to do it. Not with its new AI:Trail quattro battery-electric beast that it showed off after a tease at the Frankfurt Motor Show.

The new AI:Trail completes a quartet of vehicles the German automaker started rolling out in early 2017 with the Audi Aicon. All four concepts are on display at the Audi booth during the show.

The three others include the Aicon, a long-distance autonomous electric sedan with an 800-km (497-mile) range at the 2017 Frankfurt show. It was followed by the PB18 e-tron low-slung sports car at last year’s Paris show. At this year’s Shanghai auto show, Audi showed the AI:ME, an autonomous city car.

(Audi to Unveil Fourth of Four Vehicle Concepts at Frankfurt)

The AI:Trail quattro is a different beast altogether while featuring some of the same capabilities as its predecessor. The concept is a merger of off-road master – hence the quattro – and autonomous driver. The design of the body is aimed at giving occupants an immersive experience off road. 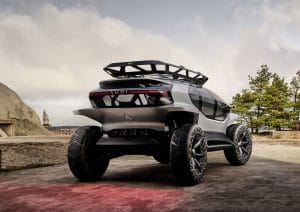 The AI:Trail can travel as far as 310 miles on a charge.

The glass surrounding the cabin extends all the way to ground level, providing unrivaled all-round visibility. The ample battery capacity ensures sufficient range even away from dense networks of charging stations.

The “Trail” part of the name evokes the idea of exploring nature. That is why there are no big screens on board for streaming TV series or videoconferencing; instead, broad glass surfaces provide a clear view of the surroundings.

“With the AI:Trail, we are showing an off-road concept with an emissions-free electric drive for an innovative driving experience away from paved roads,” said Marc Lichte, Audi’s Head of Design. “Consistent with this, we designed a monolithic basic vehicle body with maximum glazing to create an intense connection to the surroundings. A concept for sustainable mobility on demand.”

Audi is now opening up the potential applications for its visionary vehicles to include off-road terrain. The car is equipped with four electric motors, systems for assisted and automated driving and—typically for Audi—quattro permanent all-wheel drive.

At 13.5 feet long and a little more than 7 feet wide, the AI:Trail offers a study base for which to build a rugged off-roader. It’s also 5.5 feet high, meaning plenty of room for passengers. It sits on 22-inch wheels and 33.5–inch tires meaning plenty of ground clearance –13.4 in– andit can ford through water more than half a meter (1.6 ft) deep. 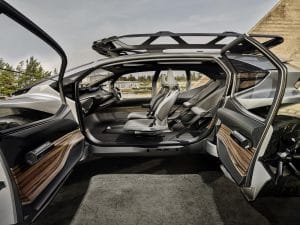 The interior of the AI:Trail is spartan with just the basics needed.

On rough, rocky terrain, this architecture provides plenty of agility without the battery unit integrated in the floor coming into contact with the ground. Adding to its potential capability is that it’s light weight, made of a mixture of high-tech steel, aluminum and carbon fiber. It weighs in at about 3,858 pounds, allowing for maximum battery performance.

Unsurprisingly, it’s a very minimalistic vehicle on the inside. Pedals, a yoke for a steering wheel, a few buttons, and a smartphone attached to the steering column as a display and control center for vehicle functions and navigation — those are all the elements there are for the interaction between the driver and the vehicle.

Perhaps the most surprising trait is that the Audi AI:Trail is designed for driving on roads up to level 4, the second-highest level on a standardized international scale for increasing automation. With its batteries, the vehicle can travel at speeds up to 80 mph and has a range of 248 miles to 310 depending upon configuration.