Trump Says No Tariffs on Japanese Autos — For Now 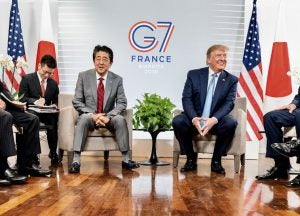 It appears that Japan will escape auto tariffs — for now.

Speaking at a press conference during the G7 Summit in France, U.S. President Donald Trump said the United States would not impose new tariffs on autos imported from Japan in the near term while the largest and third-largest economies continue their trade negotiations.

While negotiations by U.S. and Japanese trade representatives continued, Trump and Japanese Prime Minister Shinzo Abe announced a broad agreement on Sunday. Japan made concessions on agriculture while the U.S. team maintained its current auto tariffs of 2.5% on passenger vehicles and 25% on pickup trucks.

Details about the rest of the deal have not been released. U.S. Trade Representative Robert Lighthizer said at the summit that the new deal had the potential to boost annual U.S. agricultural exports by up to $7 billion from the current level of $14 billion. This would help farmers immensely.

Reuters reported that an executive of a Japanese automaker familiar with the talks said there was no change to auto tariffs while Japan appeared to have a continued reprieve from threatened U.S. national security tariffs of 25% on auto exports to the United States.

Negotiators will fill in the gaps in the deal, but it is expected to be completed by the end of the month. The new deal reopen some of Japan’s markets to U.S. farmers, which was lost when Trump pulled the U.S. out of the Trans-Pacific Partnership trade deal in 2017.

U.S. beef and other products have been at a disadvantage to competition from Australia and Canada, which remained in TPP. At the announcement with Abe, Trump said Japan had agreed to buy excess U.S. corn that is burdening farmers as a result of the tariff dispute between Washington and Beijing.

“We have excess corn in various parts of our country with our farmers because China did not do what they said they were going to do,” said Trump in a statement tweeted by the White House.

“And Prime Minister Abe Shinzo, on behalf of Japan, they’re going to be buying all of that corn.” Abe was quick to clarify that would be handled by the private sector in Japan.

Trump did take time to offer up an optimistic comment about talks with China, saying that he expected that they will get done soon and that both sides will ultimately be pleased with the deal.

(Colorado Next State to Bypass Trump and Make Deal with Automakers)