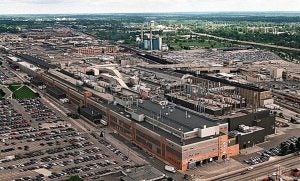 In its heyday, Buick City was one of GM’s largest and most important manufacturing sites.

A long-abandoned General Motors plant in Flint, Michigan could soon be producing vehicles again, but this time for Mahindra and Mahindra.

The Indian automaker’s U.S. subsidiary, Mahindra Automotive North America, signed a letter of intent to erect a plant on the old 364-acre Buick City site. It’s a move, the company said in a news release, that could create as many as 2,000 jobs in a city devastated by the decline of its once-massive automotive manufacturing base.

But there are several challenges that need to be overcome before Mahindra goes ahead with the plant, it cautioned. The most significant is the need to lock down a $6 billion deal with the U.S. Postal Service which plans to award a deal to supply 180,000 delivery trucks over the next 20 years. Mahindra is one of the six finalists for the contract which is set to be awarded later this year.

If the Flint project does go through it would likely be used as a base for more than just postal vehicles, however. Mahindra already operates a small factory in the Detroit suburb of Auburn Hills, where it currently assembles the Roxor, an off-road vehicle that has generated significant demand. The facility is out of capacity and Mahindra could add production in Flint. 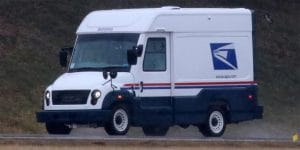 A prototype of the USPS delivery truck Mahindra has developed. The post office plans to award a contract for 180,000 trucks this year.

(Ford and Mahindra expand a global alliance that could include launch of new EV. Click Here for more.)

The company also has been hinting of plans to introduce a street-legal SUV, a goal it has had in mind for more than a decade. Back at the beginning of the decade, it announced plans to set up a dealer network to handle both an SUV and small pickup. Though a number of dealers signed on in the U.S., the venture collapsed, leading to a flurry of lawsuits that took years to resolve.

“Winning the USPS contract is a key element of our growth strategy but it’s only a piece of what we have planned,” Rick Haas, president and CEO of Mahindra Automotive North America, said in a Thursday morning statement. “We have a long-term product plan and we believe the former Buick City site in Flint is a strong contender for what would essentially be Mahindra’s first large scale manufacturing operation in the United States.” 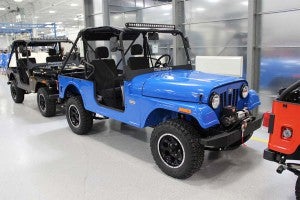 Mahindra is currently producing the off-road Roxor at a plant in suburban Detroit.

The Mahindra project faces several other potential obstacles, including Mahindra’s drive for tax incentives. The company is looking at several other possible sites if the Flint deal falls through and says a final decision “will be driven in part by the financial incentives that are available from the State of Michigan.”

No price tag has been revealed by either Mahindra or RACER Trust. More formally known as the Revitalizing Auto Communities Environmental Response Trust, it was created in 2011 as part of the General Motors bankruptcy settlement in order to find new uses for abandoned GM facilities.

A number of those factories have been sold since then but the sprawling Flint site largely sits idle, several projects, including one for an “eco industrial park,” falling through. Another 33 acres of GM property were taken over by automotive supplier Lear which has opened a parts operation there. 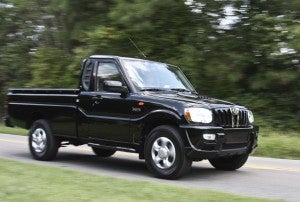 Mahindra & Mahindra’s first entry into the U.S. was expected to be this pickup. But its plans for a dealer network collapsed.

The first plant on what became Buick City opened in 1903 and, in the 1980s, it became one of GM’s largest and most important complexes, the automaker not only using it as the home for its Buick brand but as a test bed for the highly automated manufacturing processes it was developing. But production was sharply curtailed by the late 1990s and halted entirely in 2010, most of what was left of GM’s operations there now demolished.

The cutbacks came as a major blow to the City of Flint, where GM was founded, especially with the automaker closing a number of other facilities in and around the city.

It has made some new investments in the area in recent years, including a new, $65 million parts distribution center formally opened this week. In June, the automaker also said it would invest $150 million to expand a Flint factory producing heavy-duty pickups.

(Click Here for more on the opening of GM’s new Flint distribution center.)