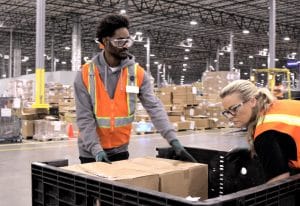 General Motors used the dedication of a new $65 million distribution center in Burton, Michigan, to underscore its commitment to nearby Flint, where the company was born more than a century ago.

The new processing center in Burton is less than a mile from the Flint city line and will house some 1,200 temporary and hourly employees, according to GM and representatives of the United Auto Workers.

It replaces older distribution centers literally next door to the new center in suburban Flint that has now closed and another outside Dayton, Ohio, that GM is shutting at it transfers operations to the Customer Care Aftersales center, which will feed parts to GM’s 12 parts distribution centers around the United States.

“GM has the highest owner loyalty of any manufacturer, and a big part of that equation is getting high-quality parts into the hands of trained service technicians when and where they need them,” said Tim Turvey, GM global vice president, Customer Care and Aftersales.

“That’s why this particular facility is so vital. Great service keeps our customers coming back year after year.” 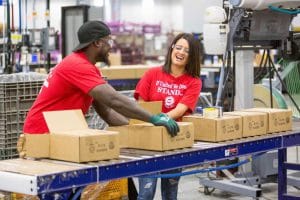 Turvey noted GM now employs more than 9,500 people in Genesee County, around Flint, including the Grand Blanc headquarters of the company’s Customer Care and Aftersales business and the Flint manufacturing complex.

GM’s Chevrolet, Buick, GMC and Cadillac brands all consistently score at or near the top of J.D. Power’s annual Customer Service Index Study, which measures satisfaction with service at a franchised dealer or independent service facility for maintenance or repair work among owners and lessees of 1- to 3-year-old vehicles.

“Strategic investments in our core business, and the strong U.S. economy, are creating opportunities for GM and its employees all over the country, and especially here in Michigan,” added Engle as he countered the perception that GM has walked away from industrial communities in the Midwest such Flint and Lordstown, Ohio.

The 1.1 million-square-foot plant, located on 141 acres, is triple the size of the facility that it is replacing. The increased capacity allows for greater efficiency and output as employees unitize and package as many as 120 million service parts a year.

“We have had tremendous support from the City of Burton, including Mayor Paula Zelenko and the city council, UAW Local 651, the project management team at NorthPoint Development and the Michigan Economic Development Corp. to take this facility from concept to reality,” Engle added. “We are very grateful for this opportunity to expand, grow and contribute to the Burton community,” he added. 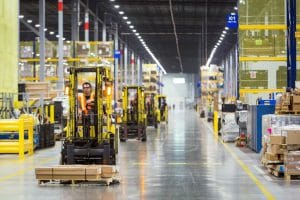 General Motors new processing cente is s 1.1 million-square-foot plant and triple the size of the facility that it is replacing.

Zelenko said the City of Burton, long the home of thousands of GM workers employed in Flint, went through its share of hard times after the 2008 financial crisis when GM was forced into bankruptcy. “Our property value collapsed. We lost 40% of our property value and we had to lay off 30% of our (city) employees,” said Zelenko, who has been Burton’s mayor for nine years.

Fortunately, Burton wasn’t swept up into the water crisis in Flint, when mismanagement by state officials who take over operation of the city of Flint left lead in the community’s drinking after its switched to drawing water out of Flint River, long contaminated by industrial waste, much of it from GM. The threat to public health was uncovered in 2015.

Only one small neighborhood in Burton was tied into the Flint water system and impacted by the lead crisis. After the company’s own tests found unsatisfactory levels of contaminants in water supplied by the city, GM plants had stopped using Flint water to clean engine parts even before state authorities acknowledged they had created a public health crisis.