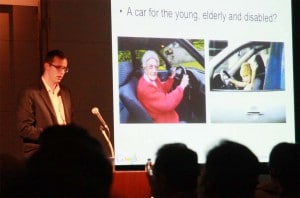 Anthony Levandowski was hit with 33 counts in a criminal complaint. Photo courtesy Shinygogo.

A federal grand jury in San Jose, California, has indicted Anthony Scott Levandowski in a 33-count criminal complaint charging him with stealing trade secrets from his former employers at Google and Waymo.

David L. Anderson, the U.S Attorney for the Northern District of California, and  John F. Bennett, the special agent in charge of Federal Bureau of Investigation’s office in San Francisco, noted the indictment alleges Levandowski, 39, of Marin County, was a Google engineer and one of the founding members of the group that worked on Google’s self-driving car project.

Levandowski worked on the project from 2009 until he resigned from Google without notice on January 27, 2016. Levandownski had joined Google as one of the founding members of Project Chauffer, the indictment notes.

“All of us have the right to change jobs,” said Anderson, “none of us has the right to fill our pockets on the way out the door. Theft is not innovation.”

At the time of his resignation in 2016, Levandowski was the lead of Google’s Light Detecting and Ranging (LiDAR) engineering team.

The indictment alleges that in the months before his departure, Levandowski downloaded from secure Google repositories numerous engineering, manufacturing, and business files related to Google’s custom LiDAR and self-driving car technology.

The files downloaded included circuit board schematics, instructions for installing and testing LiDAR, and an internal tracking document, according to the indictment.

The indictment also alleges that at the time he took the files, Levandowski was involved with two companies competing with Google in the self-driving space: Tyto LiDAR LLC and 280 Systems Inc., the latter of which would become Ottomotto.  Ottomotto acquired Tyto in May 2016, shortly after Uber Technologies Inc. agreed to acquire Ottomotto and hire Levandowski.

The indictment charges Levandowski with 33 counts of theft and attempted theft of trade secrets.

The press release from the U.S. Department of Justice noted an indictment merely alleges that crimes have been committed, and all defendants are presumed innocent until proven guilty beyond a reasonable doubt.

However, if convicted, Levandowski faces a maximum sentence of 10 years and a fine of $250,000, plus restitution, for each violation. However, any sentence following conviction would be imposed by the court after consideration of the U.S. Sentencing Guidelines and the federal statute governing the imposition of a sentence.

The prosecution is being handled by the Office of the U.S. Attorney, Northern District of California’s new Corporate Fraud Strike Force and is the result of an investigation by the FBI.