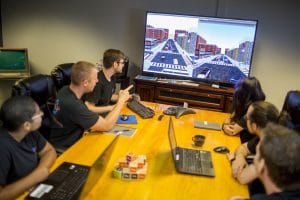 Ford acquired Quantum Signal to make use of its real-time simulation and algorithm development, as well as robotics, sensing and perception technology.

Ford Motor Co., following a path blazed by many companies in Silicon Valley, is beefing up its technical expertise through acquisitions.

In a blog post, Randy Visintainer, chief technical officer, Ford Autonomous Vehicles LLC, confirmed this week that it had acquired, Quantum Signal, a small company based in Saline, Michigan, outside of Ann Arbor, for an undisclosed sum.

“Since its founding in 1999, Quantum Signal has worked on the cutting edge of mobile robotics for numerous clients, including the military,” Visintainer said.

For decades, Silicon Valley companies have used acquisitions to fatten their technology portfolios as they grow.

“Although not widely known to the public, Quantum Signal helped the military develop software that allowed it to remotely control robotic vehicles from thousands of miles away. It even built a robust simulation environment capable of testing autonomous vehicle designs that’s still in use today,” he added.

Ford, which recently signed an agreement to develop AVs with Volkswagen AG, has been assembling a team of experts in software development, simulation and machine learning from all around the world as it accelerates autonomous vehicle development — and we’re proud to announce the squad is getting even bigger and more formidable.

Ford will use Quantum Signal’s extensive experience in real-time simulation and algorithm development to develop its Transportation as a Service platform, as well as vehicle controls that support the customer experience, functional safety and other vehicle systems. 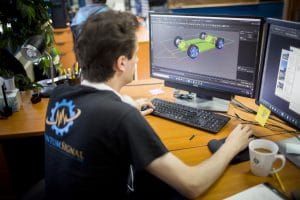 Ford acquired Quantum Signal to accelerate the launch of the automaker’s a self-driving vehicle business,

The wide range of the group’s work portfolio means it will be able to support Ford in numerous areas as the company develops self-driving vehicles and transportation as a service business, including software development and hardware prototyping.

Quantum Signal also is known for its modeling and simulation environment, which has been used by military robotics programs to explore the performance of unmanned remote and autonomous systems. The expertise will clear the way for Ford to develop more comprehensive simulation environments in which to test vehicles and even business models, Ford executives said.

Beyond simulation, Quantum Signal has done extensive work for the military in developing algorithms that help guide autonomous vehicles. Outside the software world, the company is well-versed in robotics as well as sensing and perception systems.

All of this work can be repurposed to support Ford’s self-driving vehicles to help improve their ability to analyze the environment around them.

Operating out of a former school building in Saline, Quantum Signal has cultivated its own unique culture that we want to preserve as the team joins Ford and grows in the future. This is something we’re confident we can do because we’ve done it before — and we’re currently doing it again with a machine learning company that joined Ford almost three years ago: SAIPS.

Based in Israel, SAIPS is working closely with both Ford and the team at Argo AI, another of Ford’s AV partners, using machine learning to create an innovative visual cognition system for self-driving cars that can detect vehicles or pedestrians in the surrounding environment — including their blinking turn signals and hazard lights — even under severe weather and lighting conditions.

Another core system enables fully automated, high-resolution 3D mapping of urban environments, something that plays a crucial role in allowing self-driving vehicles to situate themselves in the real world. 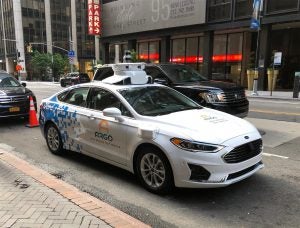 Ford is partnering with Israel-based SAIPS to move its self-driving vehicle program with Argo AI forward,

Since joining Ford, SAIPS has more than doubled its size to approximately 30 people and moved into new headquarters in Tel Aviv. Most recently, SAIPS welcomed aboard some of the world’s leading researchers in a field called reinforcement learning, which could foster learning and decision-making in self-driving vehicles with less human supervision.

Just like SAIPS, Quantum Signal will play a crucial role in advancing Ford’s self-driving vehicle development while also representing the company’s commitment to nurturing the talent needed to successfully deploy this technology.

When Quantum Signal CEO Mitchell Rohde told his team they were joining Ford, he recounted growing up in Michigan as a young boy, watching his father get an antique Model T back in working order, and hearing dad lecture him about Henry Ford’s contribution to the world.

“All engineers want to do meaningful work that makes a difference, not sit on a shelf,” Rohde told his team. “Now, they are going to get the chance to directly influence the world, much in the way that Ford did. Just like when Ford brought the freedom of mobility to the masses through the Model T, the opportunity to expand that freedom even more is here now. We can’t wait to make it a reality.”