Putting a halo around the Swedish automaker's mid-range crossover. 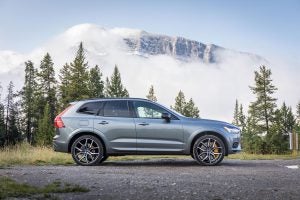 Volvo adds another performance model with the debut of the 2020 XC60 T8 Polestar Engineered.

If you’re a Volvo fan, you’ve undoubtedly been hearing the name, “Polestar,” a lot over the last few years. That said, you’d be excused if you don’t really know what it is. That’s likely because the Swedish automaker is using it in a variety of different ways.

There’s the Polestar Racing team that was launched in 1996. Then there’s the new Polestar brand that is just getting ready to launch production of a new plug-in hybrid, with an all-electric model to follow. To add to the confusion, Polestar is also a special Volvo sub-brand – think the Swedish version of Mercedes-AMG — that focuses on performance-oriented upgrades like the 2020 Volvo XC60 T8 Polestar Engineered.

What’s so special about the Polestar version compared to the regular Volvo XC60 equipped with the T8 plug-in hybrid engine? That was one of the questions we set out to answer as we headed off to Banff, Alberta for a day’s driving through some of North America’s most scenic mountain countryside. 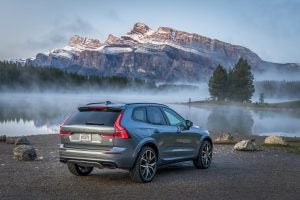 The Polestar version of the XC60 gets another 15 hp and 22 lb-ft of torque.

(Click Here for our review of the new Volvo XC40 R-Design.)

You can get a base version of the crossover for as little as $40,150, though you can expect to see that jump to $53,700 if you opt for the T8 package. And by the time the Polestar badge is affixed, you’re looking at shelling out nearly $20,000 more – $72,045, to be precise, according to the Munroney sticker on the model we navigated that day.

Even the base version of Volvo’s mid-range XC60 is a handsome vehicle, its gently raked roofline and sculpted body belying the classic image of boxy Volvo wagons. The Polestar Engineered model gets a number of subtle exterior updates, starting with the gloss black grille surround and black chrome exhaust tips. There are 21-inch Y-spoke forged alloy wheels and gold brake calipers. And, of course, there are the requisite Polestar Engineered badges.

Inside, the T8 and Polestar models are largely identical, which is nothing to lament. The cabin is lavished with leather, and the wood inlays subtle chrome accents give it a decidedly upscale feel. The instrument cluster is 12.3-inch reconfigurable panel, and the vertically oriented 9-inch touchscreen anchors the center stack and makes it easy to operate the Sensus infotainment system.

(Care by Volvo subscription program faces California probe. Click Here to find out why and what that could mean.) 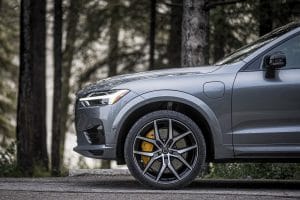 Among the special features on the XC60 Polestar are distinctive, gold Akebono brakes, as well as an adjustable Ohlins suspension.

Before we get on to what makes the Polestar model so distinctive, a few thoughts about the Sensus system. It has been upgraded and is now as fast as most tablet computers. The tiled layout is generally intuitive. But the voice control system continues to rely on arcane commands, distinct to Volvo, that can frustrate users. We’d still like to have a control knob, as well, to ease things like zooming in on a map.

That said, there’s relatively little else to harp on with the XC60 Polestar – though we had previously said that about the T8. Volvo was one of the first automakers to recognize that electrifying a vehicle – especially one in the luxury market – shouldn’t mean sacrificing performance and driving enthusiasm to chase down every last mile from a gallon of gas.

Like the regular model, the Polestar relies on a 2.0-liter gas engine that’s both supercharged and turbocharged and paired with an electric drive. While the 11.6 kilowatt-hour lithium-ion battery provides barely 20 miles all-electric range in real-world conditions, the system continues to operate as a conventional hybrid when the pack is drained, improving mileage and performance.

With the Polestar, the already peppy “twin-engine” is “chipped,” meaning a revised computer control systems manages to eke on an extra 15 horsepower and 22 pound-feet of torque, bringing the numbers here to 415 hp and 494 lb-ft, and making it one of the more powerful offerings in the segments. Along with the added power, the Polestar model provides six selectable driver modes, including one that’s customizable for individual preferences. 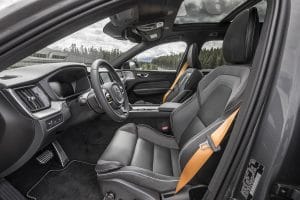 To really give us a feel for the raw acceleration, Volvo arranged for us to make some dragstrip-style runs down the runaway of a small, private airport outside Banff. The Polestar’s drivetrain proved up to the task, pushing us deep into the XC60’s plush, 10-way power seats. If we have any other complaints about the driveline, though, it’s the less than crisp behavior of the crossover’s eight-speed automatic transmission that directs power to all four of the crossover’s wheels.. It just needs to be more responsive to driver input and road conditions.

Our stop at the airport also gave us a chance to more closely test out some of the other features of the XC60 Polestar Engineered. These include:

·       An Ohlins Adjustable Suspension which uses dual flow valve technology and can rapidly reset each corner from soft to firm or anything in-between;

·       Oversized Akebono Brakes, including six-piston calipers and ventilated, 14.6-inch discs up front. They are dual-mode brakes, regenerating energy to recharge the batteries under light braking loads and then seamlessly switching to friction mode under hard stops;

·       A lightweight front strut bar that also features a gold adjuster knob for the Ohlins suspension. 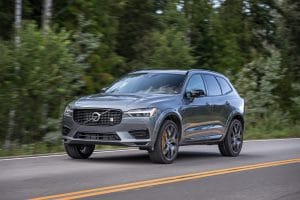 Like classic Volvos, the Polestar edition retains a strong emphasis on safety, with collision avoidance and numerous other ADAS systems standard.

Will any Volvo owners actually use that feature? Hard to know, but for those who might, it will be extremely easy – there’s even a small graphic to show you what a turn of the knob would accomplish.

The good news is that the suspension works brilliantly. Even under the most aggressive maneuvers – think the Swedish “moose test” – the XC60 Polestar handled with aplomb, showing extremely little body roll and maintaining its composure. The Akebono brakes, meanwhile, repeatedly brought the CUV to a rapid halt with no sign of fade.

Volvo already offers a Polestar-touched version of the low-volume V60 wagon. The debut of the XC60 Polestar Engineered comes with a strong hint from the automaker that we’ll see this performance sub-brand tackle still more models in the future.

There are likely those who will shake their heads and wonder about what has happened in the years since Volvo was acquired by China’s Zhejiang Geely. Clearly, these aren’t the boxy, boring but comfortably safe vehicles the Swedes long were known for.

That’s no reason to lament, however. Volvo’s latest design language is far more pleasing to the eye, and it’s hard to complain about getting more performance out of a package – especially when it’s even safer than before. Like the rest of the XC60 line-up, the Polestar edition is loaded with an array of advanced driver assistance systems, such as forward collision warning with auto-braking and blind-spot detection.

Whether the 2020 Volvo XC60 T8 Polestar Engineered is worth the added cash is something individual buyers will have to consider. Serious performance fans routinely shell out that sort of money to cut a couple tenths of a second off their 0-60 times. And the special edition is more than a straight-line sled. It struts its stuff wherever you drive it while maintaining plush and comfortable manners under less aggressive driving.

We expect the Polestar model to generate relatively modest demand, that stiff price tag being the key reason. But it clearly places a nice halo, demonstrating the capabilities of the XC60 line overall.