Broadening the brand's reach in the booming SUV market. 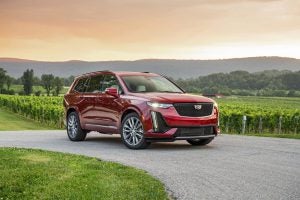 Cadillac’s expansion of its sport-utility line-up continues with the new three-row XT6.

There’s a bit of an irony to the debut of Cadillac’s newest SUV, the XT6. General Motors’ luxury brand was one of the first entrants into the luxury SUV space, with the original Escalade making its debut during the 1998 model-year, just ahead of BMW’s X5. But Caddy seemed determined not to repeat that success.

It did roll out the smaller SRX a few years later, but then seemed reluctant to follow up, continuing to focus on the sedans and coupes that were making up a steadily dwindling portion of the luxury car market. It’s only now that Caddy is catching up, within short order introducing both the compact XT4 and XT6 models and, last month, revealing a notable, mid-cycle update to the mid-range XT5.

The 2020 Cadillac XT6 slots in just below the original “bling-bling” machine, the Escalade, and like that flagship, the new model offers three-rows for either seven or eight passengers, depending upon how seating is configured. The new offering is not only smaller overall, but based on a crossover architecture, rather than the body-on-frame platform used by the ‘Slade.

To get a sense for what Caddy has put together, we headed down to Washington, D.C.’s tony Georgetown neighborhood to begin a lengthy drive out through the Virginia suburbs and West Virginia countryside.

As we noted during a preview of the XT6 at the North American International Auto Show last January, it’s unlikely to match the smaller XT4 in terms of volume – though it carries a significantly higher price tag and profit margin. Critically, XT6 will serve to set a tone for the brand and prove that Cadillac is capable of adapting to the rapidly changing U.S. luxury market where even competitors like BMW and Mercedes-Benz have had to shift resources away from traditional sedans like the 7-Series and S-Class.

Visually, the XT6 picks up on some of the familiar Art & Science design cues first seen with the launch of the original Caddy CTS sedan for the 2003 model-year. These include the slim, vertical head and taillights, with a massive, upright grille boasting a large version of the latest take on the Cadillac wreath and crest logo. That said, the new utility vehicle is far less angular and edgy than earlier Art & Science designs, reflecting the maturation of the concept. 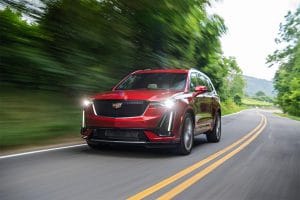 The XT6 has a tautness to it that may reflect the decision to share its underpinnings with the two-row XT5, rather than the C1XX platform used by other GM three-row models, such as the Buick Enclave. It does come in about five inches shorter, however, at 199 versus 204 inches. But you likely wouldn’t notice it without resorting to a tape measure considering the effective use of its interior. There’s ample room throughout, even the back row that is all too often a penalty box for anyone beyond their tween years.

Three-row packages have become a strong alternative for family buyers who can’t stomach a minivan. But for those empty-nesters or others who don’t need the eight-passenger model’s second-row bench, the option is a pair of comfortable captain’s chairs.

One of the other nice details comes in the form of the power-operated seats, including a power-fold system that makes gaining access to the back row quick and easy, even for a child. Another nice touch: the pullout drawer under the second row seats. And hands-free operation of the power liftgate is standard, simplifying access to the cargo bay when your hands are full.

While Caddy has long billed itself “the standard of the world,” it’s been a stretch to apply that claim to many of the products it has rolled out since its finned heydays. That’s particularly true when it comes to cabin refinement, an array it is only lately making serious efforts to address.

The 2020 Cadillac XT6 follows the brand’s new “Y” strategy, with a base car starting at $53,690 including $995 destination charge – splitting into two alternative upgrades, the Premium Luxury and the Sport. For those who want all the classic luxury details, the choice is obvious by the name. But you can flesh out the more aggressively tuned Sport with most everything the Premium L 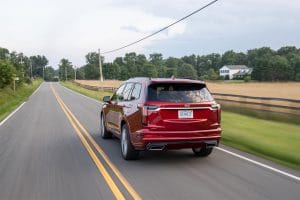 The 2020 Cadillac XT6 nestles in between the Escalade and the new XT5.

uxury offers if you want to pay for the Platinum Package options.

The reality of today is that you can get leather and chrome trim on many mainstream SUVs. Cadillac is well aware that technology has become one of the defining features of modern luxury. It has integrated some essentials into the XT6, such as six USB ports – four using the newest USB C connector.

Meanwhile, it has made some critical improvements to the Cadillac CUE infotainment system that took much derision when it first debuted a few years back. It is quicker and more intuitive now, eliminating the volume control touch-slider that always seemed to malfunction to some degree. And while some brands, such as Audi, are abandoning mechanical controls to go all-touch, Caddy has wisely added a rotary knob that is especially useful for tuning a radio and zooming in and out on a navi screen. For audiophiles, meanwhile, there’s an optional, 14-speaker Bose Performance Series audio package.

The luxury marque also made a big point about adding 11 safety and driver assistance features to the new XT6. But that isn’t quite as impressive as it might sound. No question, these include a must-have group of technologies with today’s cars, including forward collision warning, cross-traffic alert and lane departure warning.

But there are a few other features that aren’t on the list, notably adaptive cruise control that lets you set a desired speed and then automatically maintains a safe distance behind the car ahead. That’s something even many mainstream products are now starting to make standard issue.

Caddy, if anything, seems to want to follow the European model, providing customers a reasonable base price that quickly climbs once all the boxes are checked. All-wheel-drive is another option. So will be the semi-autonomous Super Cruise system that first appeared on the Cadillac CT6 sedan. It is expected to be added to the XT6 option list later on during the 2020 model-year. 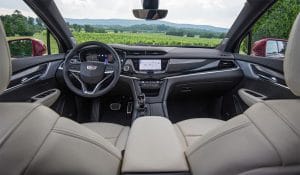 Cadillac has clearly figured out that leading edge technology is a differentiator in the luxury segment.

One other feature that customers can opt for upgrades the standard LED headlamps with a 16 LED projector system that is capable of operating full-time in bright mode. It automatically dims the LEDs that would aim into the face of oncoming traffic or the mirror of a vehicle close in front. Unfortunately, that technology, abbreviated as ADB, currently isn’t approved for use in the U.S. and is disabled on the XT6 but could be activated once federal regulators approve. That’s expected in the next year or two.

All versions of the new XT6 share a single engine package, a 3.6-liter V-6 making 310 horsepower and 271 pound-feet of torque. Acceleration is solid and there’s a linear response to the throttle. The new nine-speed automatic, meanwhile, is smooth, with almost imperceptible shifts until you stomp aggressively on the throttle. Fuel economy is 18 mpg City, 25 Highway for FWD, 17/24 for AWD.

The front-wheel-drive package is likely to gain traction in Sunbelt states but, if Caddy’s experience mirrors that of the rest of the industry, you’ll rarely find anything but all-wheel-drive packages available at dealers in the rest of the country. Intriguingly, the automaker has opted for two separate AWD systems, a single-clutch version for the Premium Luxury and a more capable twin-clutch alternative in the XT6 Sport.

Under the right conditions, the Sport can send a full 100% of its torque to the back wheels. More importantly, the twin-clutch system allows it to direct torque to the outer wheels to help steer through, rather than plow into, a corner.

That became obvious over the course of our day’s drive, especially on tight and twisty back roads in the back hollers around the Virginia-West Virginia border country.

Adding to the sporty nature, a dynamic, electronically controlled damping system that automatically and almost instantaneously adjusts each individual shock, anywhere from fully firm to absolutely soft, depending upon road conditions and driver input. We were surprised to see Caddy abandon the magnetic ride control system for a somewhat more conventional technology but, to be honest, we’d have been hard-pressed to tell them apartin actual operation. The big difference? A much lower price tag for the buyer. 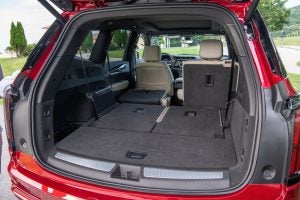 The 2020 Cadillac XT6 offers plenty of cargo space in its spacious interior with three rows of seats.

No, this isn’t a V-Series sedan, but the XT6 Sport certainly delivers a more aggressively competent ride than many of the other three-row SUVs we’ve driven in recent years. (Meanwhile, if the hints we were hearing from Caddy officials offer any indication, stay tuned for the V-Series badge to finally land on one or more of the brand’s SUVs in the near future.)

As for steering, there was a good amount of confidence-building road feel, again with the faster steering ratio of the Sport model being our personal preference. But, even the Premium Luxury model offers good road dynamics. There’s no more of the floaty, sloppy steering and handling that discouraged many an old SRX buyer.

With its distinctive styling, array of standard and optional features, and good road dynamics, the 2020 Cadillac XT6 continues to move the GM luxury brand forward and should give buyers who are normally locked into European and Asian marques a reason to pause and reconsider.

If there’s anything that could give pause, it’s the price, especially when loading the XT6 up. All-wheel-drive, for one thing, adds about $2,000. The Sport starts around $57,000 before delivery fees. And, if you check all the boxes you will wind up cracking the $70,000 barrier. But the XT6 has enough going for it that it should help justify the brand’s expanding push into SUVs.