FCA has seven vehicles in top 15 most stolen. 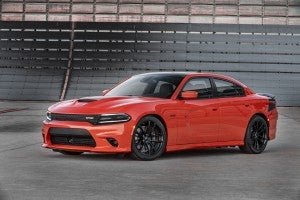 The 2016-2018 Dodge Charger is the vehicle that is most likely to be stolen in the United States..

If you want to buy a car that goes really fast, buy a Dodge Challenger or Charger. Not only does go from 0 to 60 mph quickly, it’ll be gone from your driveway nearly as fast, according to a new report.

According to the Highway Loss Data Institute, the two most stolen vehicles in the U.S. are the 2016–19 Dodge Charger Hemi and the Dodge Challenger SRT Hellcat. They are stolen five times more often than any other vehicles.

(The More the Muscle, the Bigger the Discount, Dodge Announces)

FCA products aren’t alone in showing up repeatedly on the list. Three Nissan products are in the top 10, including the Infiniti Q50 and QX80 being No. 3 and 4. In fact, the Q50 is almost as likely to be stolen as the aforementioned Chargers and Challengers.

“The models most likely to be stolen tend to be powerful, pricey or pickups, but vehicle theft is also a crime of opportunity,” says HLDI Senior Vice President Matt Moore. “Better security features on all vehicles would be the best way to address the problem.”

The new list seems to bear that out based on vehicles that didn’t make this list, specifically the Cadillac Escalade, which was a mainstay for many years, HLDI officials said. They point out that changes to the luxury ute are the reason it fell off the list. 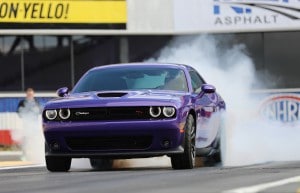 The  Dodge Challenger is the second-most likely vehicle to be stolen in the U.S..

Escalade owners are also likely benefiting from enhanced security features that go beyond the ignition immobilizers that most of today’s vehicles have in order to prevent them from being started without a proper key.

Standard immobilizers did stop the Escalade from being frequently stolen, so Cadillac added more antitheft features beginning with the 2015 model year, the group notes.

The new antitheft technology includes glass breakage sensors, motion detectors and an inclination sensor that triggers an alarm if someone tries to take the wheels off, tow the vehicle or lift it onto a flatbed truck.

(It may not have industry-best quality, but Dodge scores high in the JD Power APEAL study. Click Here to find out why.)

On the flip side, topping the list of vehicles least likely to be stolen is the two-wheel-drive BMW 3 Series. It had just one claim for whole-vehicle theft in 104,901 insured vehicle years. An insured vehicle year is one vehicle insured for one year.

Two of the vehicles on the least-stolen list are the Tesla Model S and Model X. “Their low theft rate may be related to the fact that, as electric vehicles, they are usually parked in garages or close to a house to be near a power supply,” the group noted.

In a separate report last year, HLDI showed that electric vehicles from a variety of manufacturers have lower theft claim rates than comparable vehicles.