A variety of factors contributing to the deadly problem. 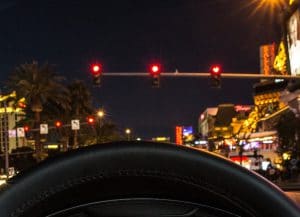 The number of deaths related to ignoring or running red lights is on the rise.

Residents of the Detroit suburb of Pleasant Ridge know to wait a couple extra seconds after the light changes to green at the intersection where busy Woodward Avenue meets the interchange with I-696. Almost every day, police are called out to deal with crashes caused by drivers racing on or off the freeway and trying to run a red light.

That’s not just an isolated phenomenon. Across the country, red light running has become endemic, leading to more deaths than at any time during the past decade. All told, the AAA reports that 939 people were killed when vehicles blew through a red light in 2017, the latest year for which data is currently available.

“Drivers who decide to run a red light when they could have stopped safely are making a reckless choice that puts other road users in danger,” David Yang, executive director of AAA’s Foundation for Traffic Safety.

The number of deaths associated with running red lights fell to a decade-low 715 back in 2009 and has risen steadily since then. The AAA study didn’t track the reason why, but several factors could be at play, according to the travel and safety group, as well as other experts:

The AAA Foundation for Traffic Safety also suggests that the way traffic signals operate may be part of the problem. Among other things, yellow caution signals may be too short, so even those who don’t intend to run a signal can get caught in the middle of an intersection when the light changes to red.

National research has shown that longer yellow lights can significantly reduce the number of crashes at intersections.

Another possible solution is to sync lights up from one intersection to the next. When they’re out of sync that not only can contribute to a build-up of congestion but lead frustrated motorists to try running the next light.

Whatever the reason, AAA officials suggested that communities take steps to address the problem, among other things by increasing enforcement through the use of red light cameras. But the group also says such efforts need to be carefully supervised to ensure that safety is the key goal, not the use of cameras simply to generate revenue.

The City of Chicago several years ago removed nearly a third of its red light cameras, in part because critics contended they were installed primarily for revenue enhancement. Some of those ticketed also sued citing unusually short yellow lights at intersections with cameras that, they claimed, made it more likely motorists would inadvertently run a red and then be fined. 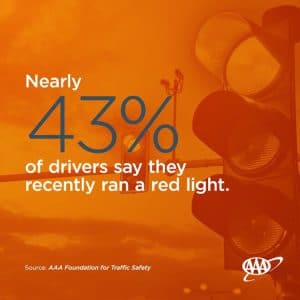 As for motorists, AAA suggests they pause when a light turns green to make sure no one will try to dash through the intersection. The group also suggests making eye contact with pedestrians and bicyclists.

Traffic deaths, in general, have risen sharply over the past decade after years of decline. After dropping to a low of 32,744 Americans killed in traffic accidents in 2014, the figure jumped to 37,133 three years later.

But while overall deaths are up 10% since 2012, those associated with running lights have surged 28%, underscoring the severity of the problem.