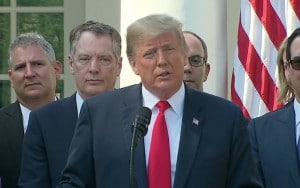 “Our great American companies are hereby ordered to immediately start looking for an alternative to China, including bringing your companies HOME and making your products in the USA,” Trump tweeted.

The president does not have the authority to “order” companies to stop doing business with other countries. He sent out several missives Friday about China’s action.

“Our Country has lost, stupidly, Trillions of Dollars with China over many years,” he tweeted, adding later, “They have stolen our Intellectual Property at a rate of Hundreds of Billions of Dollars a year, & they want to continue. I won’t let that happen! We don’t need China and, frankly, would be far better off without them.” 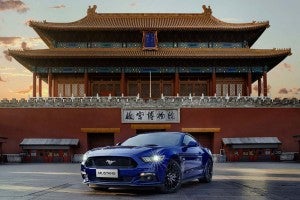 Chinese fans of American cars are going to be unhappy with the 25% tariff on autos coming in December.

China’s new levies are in response to a 10% tariff on more than $300 billion in tariffs Trump put in place earlier this month, ending a temporary “cease-fire” of taxes each country was implementing.

“In response to the measures by the U.S., China was forced to take countermeasures,” the state council said in a statement.

“The Chinese side hopes that the U.S. will continue to follow the consensus of the Osaka meeting, return to the correct track of consultation and resolve differences, and work hard with China to end the goal of ending economic and trade frictions.”

The new import taxes start on Sept. 1 and run until Dec. 15, which matches the time frame for Trump’s new 10% tariff. Naturally, automakers and parts suppliers are part of the new round of levies with a 25% tariff on automobiles and a 5% levy on auto parts starting Dec. 15.

Trade representatives for both countries held talks in Shanghai last month and are scheduled to resume negotiations early next month in Washington, D.C.

Though the initial impact to automakers will be negligible, the second wave of tariffs hitting in December are targeted at them and some will suffer more than others. Ford, Tesla, BMW and Mercedes-Benz are likely to take the biggest hits.

Chinese President Xi Jinping is responding to the U.S. by raising tariffs on American-made goods.

The four export the largest number of vehicles to China. In 2018, BMW exported about 87,000 luxury SUVs to China from a plant near Spartanburg, S.C. It exports more vehicles to China than any other U.S. auto plant, the Associated Press reported.

The four automakers combined exported about 164,000 vehicles to China from the U.S. in 2018, according to the Center for Automotive Research, a research organization based in Ann Arbor, Michigan.

Tesla received about 12% of its revenue from its exports to China. Last year, it sent about 14,300 electric cars and SUVs from California to China, according to Barclays.