Plenty of rewards for those on "Dawn Patrol." 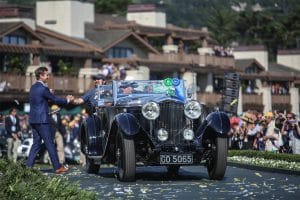 A striking 1931 Bentley nabbed Best-of-Show honors at the Pebble Beach Concours d’Elegance on Sunday, a win considered the automotive equivalent of an Academy Award.

Of course, it didn’t hurt to have about 40 Bentleys among the field of roughly 200 rare and exclusive classic cars at this year’s Concours — a turnout intended to celebrate the 100th anniversary of the British brand.

“The fact that it’s the centennial may have helped” build some support, said Sir Michael Kadoorie, the Hong Kong billionaire collector who owned the Bentley 8 Litre Sports Tourer. But the car clearly had plenty going for it on its own, Kadoorie added, calling it “the ultimate Bentley for W.O.” Bentley, the marque’s founder. 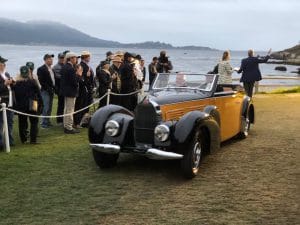 Heading out on “Dawn Patrol” has its rewards – like spotting a Bugatti rolling onto the field.

The afternoon awards ceremony at the well-attended Pebble Beach gathering capped off the Monterey Peninsula’s annual “Car Week,” a series of car shows, races, auctions and other events that brought out tens of thousands of classic car fans from around the world.

As has become tradition, the hardiest of Concours fans began gathering by 5:00 AM for what has become known as “Dawn Patrol.” The rewards for their diligence included hot coffee, fresh donuts, “Dawn Patrol” hats and, by the first light of morning, the chance to see this year’s entrants move under their own power onto the sprawling fields behind the Lodge at Pebble Beach.

As the vehicles — some more than 110 years old — rolled into their assigned spots, owners, family and staff raced to give their prized possessions a final once-over, polishing sheet metal, cleaning windows and making sure there were stray blades of glass in the tire treads. 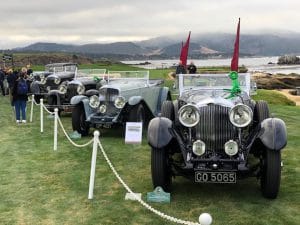 Bentley celebrated its centennial with more than 40 cars on display at this year’s Concours.

“Three of us spent hours working on it yesterday,” said Michael Pollock, whose father Brian had brought a 1935 Bugatti Type 57 to this year’s show. One of the rarest and most coveted models produced by the French brand, Father, son and several helpers were doing even more work before the judging began early Sunday morning.

That was no surprise to Gene Perkins, a car collector from Indianapolis who has long served as a judge for one of the big classes of Packard models.

Some of the stories are apocryphal. A car won’t lose points for having grass stuck in its tires, “but it’s tough,” said Perkins, who has entered some of his own cars over the years at the Pebble Beach Concours. “Just by being invited (to show a car), you’re a winner. So, we have to make some tough decisions and there’s a lot of splitting of hairs,” he added, explaining that there can be no ties in the dozens of different vehicle classes. 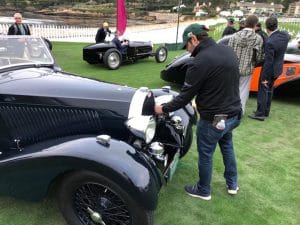 Rigorously prepping acar for the Concours’ rigorous judging is critical. Even something minor can cost points.

To get one of those coveted invitations isn’t easy. Nor is it cheap. As the results of the many classic car auctions during Pebble Beach Car Week demonstrate, the collector world’s heavy hitters are more than willing to invest millions of dollars to find the rarest, the most striking, the most special cars. On Thursday night, an Aston Martin DB5 used to promote the film, Thunderball, went for $6.4 million at a Sotheby’s auction. It was a relative bargain compared to some of the exotic Ferraris that now command more than $60 million apiece.

And that’s before a restoration effort that can cost as much as $5 million itself, said Don Clark, who manages the private collection of billionaire husband-and-wife Craig and Susan McCaw.

There are a variety of factors at play when the judging begins at Pebble Beach. The quality and appearance of the vehicle matters, of course, as does authenticity. Using the wrong screws can cost points, and there’s always a debate if an owner goes for a different paint color or interior fabric than what was originally used. 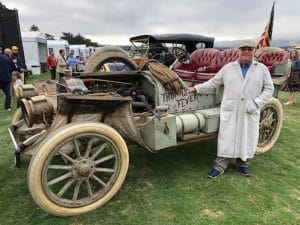 “Provenance” matters, too. In this case, the Thomas Flyer won the 1908 New York-Paris race.

Then there’s the issue of “provenance,” said Clark, pointing to the 1931 Bentley he was overseeing for the McCaws. It was not only one of the last cars built before founder W.O. Bentley sold off the company to arch-rival Rolls-Royce, but a rare model shipped to a California coachbuilder for its body.

Novices are often surprised to see how different seemingly identical vehicles at Pebble Beach can be. That’s because it was the norm, among exotic marques like Bentley, Rolls, Packard and Delahaye, to produce a vehicle’s engine and platform but then turn to outside coachbuilders to create a body customized for the buyer.

Another Bentley at this year’s Concours with significant provenance of its own has long been known as the “Blue Train Bentley. It was immortalized by a race conceived by one of W.O. Bentley’s protégés, diamond mine heir Wolf Bernardo. The distinctive coupe was able to beat the Blue Train, then the fastest train in Europe, from Nice to Calais, France 90 years ago. 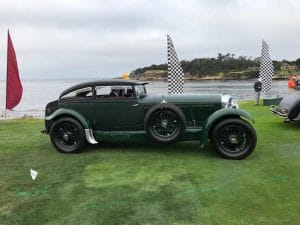 While Bentleys had an outsize presence at this year’s Pebble Beach Concours, there were plenty of Ferraris, Packards, Talbot Lagos, and even a couple of Chrysler and Cadillacs. More than a few had ties to motorsports, including one of the oldest vehicles on display.

The 1908 Thomas Flyer won that year’s New York to Paris race which saw entrants head west from the Big Apple, drive across the U.S. in an era with few navigable roads, get shipped to Asia and then work their way to the City of Lights, a trip that took the American-made runabout two months to complete.

It nearly lost in the final hours, said Jay Hubbard, who manages the classic fleet for the National Automotive Collection. As the Flyer approached Paris, a gendarme blocked its path, pointing to the car’s broken headlights. After much negotiations, a French bicyclist serving as an impromptu interpreter offered to loan the Thomas team his bike, which had working headlights. It was strapped to the hood and the car was allowed to proceed to victory.

Landing a winner at Pebble Beach, even if just in one’s own class, is a significant honor, said judge Gene Perkins. Landing best of show, he added, is like “winning the Kentucky Derby,” And like a winning horse, that blue ribbon can raise the value of an already rare and exclusive automobile by still more millions of dollars.