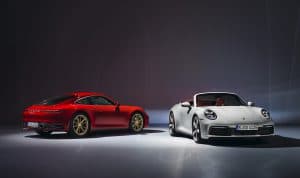 The 2020 Porsche Carrera and Carrera Cabriolet can be ordered now with U.S. arrival early next year.

Porsche’s legendary 911 line-up got two new additions for 2020: the Carrera and Carrera Cabriolet. The new models come on the heels of the debuts of the 911 Carrera S and 4S models.

Of course, the new models are powered the twin-turbo 3.0-liter flat six engine that is fitted with model-specific turbochargers. The result is 379 horsepower and 331 pound-feet of torque. The powerplant is mated to an 8-speed PDK (Porsche Doppelkupplung) transmission, and the pair push the 2020 911 Carrera from 0 to 60 mph in just 4 seconds.

(Porsche Will Electrify Everything, Including Iconic 911)

The top track speed for the 911 Carrera is 182 mph while the Cabriolet tops out at 180 mph — plenty of wind through the driver’s hair. Both new models come equipped with the Porsche Active Suspension Management system, or PASM, and the electronically variable damping system has two selectable modes, “Normal” and “Sport.”

Adding to the ride and handling of the newest members of the 911 family are wheels with staggaered diameter. They measure 19 inches at the front and 20 inches at the rear, and are 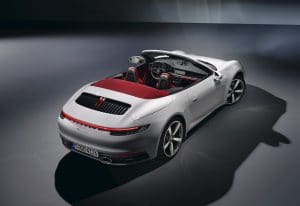 The new models also come standard with Wet Mode, which can detect water on roads and adjusts the stability control and anti-lock brakes to perform better in those conditions — and do so at the push of a button.

Like most 911 models, the new Carrera and Carrera Cabriolet are evolutions of their predecessors and siblings. They borrow from the S variants in some areas, such as the clearly defined fender arches and front luggage compartment lid with a recess reminiscent of classic 911 models, as well as the full-width LED light strip stretching across the rear.

In fact, the only real exterior difference between them are the exhaust openings in the rear fascia. To differentiate between the engine variants, the standard 911 Carrera models feature one rectangular, single-tube tailpipe on each side, while the S models are fitted with a set of round twin-tailpipes on each side. The optional Sport Exhaust system distinguished by two oval tailpipes can be ordered for all models. 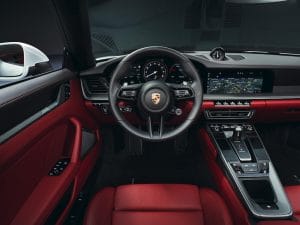 The new Carrera’s cockpit features clean gauges that are easy to read.

Similar on the outside and almost identical on the inside to the previously introduced S models, they use the same re-designed seats, the traditional centrally positioned tachometer, and the new Porsche Communication Management system with a 10.9-inch touch screen and improved connectivity.