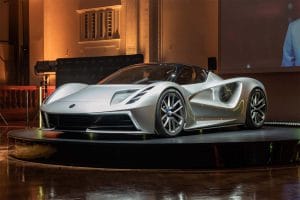 “Lotus claims the Evija will be the world’s most powerful series production road car.”

The first all-new Lotus in 11 years will also be its first all-electric model, the British sports car company officially pulling the wraps off what it is calling “the world’s most powerful series production road car.”

The new Lotus Evija – pronounced “e-VY-a” – will produce an astounding 1,900 horsepower, enough to hit 60 in less than three seconds, while topping out at more than 200 mph. The sports car will have a few limitations. Among other things, anyone interested will have to come up with a cool $2.1 million to buy one once Evija goes into production next year.

“The Lotus Evija is a car like no other,” Lotus chief executive Phil Popham proclaimed. :It will reestablish our brand in the hearts and minds of sports car fans and on the global automotive stage said in an announcement. It will also pave the way for further visionary models.”

(Can the Lotus Evija spark the brand’s revival? Click Here for more.)

Lotus clearly wanted something special to mark its comeback. The British company, which started out as an extension to founder Colin Chapman’s motorsports program, has gone through some hard times in recent years. Almost a decade ago, having been purchased by Malaysian car company Proton, it announced a grand plan to launch five new models. But that fell apart in 2012 after CEO Dany Bahar was ousted. In 2017, it was taken over by the Chinese automaker Geely, which had also purchased Volvo, and received a fresh infusion of cash.

As a part of Geely, Lotus has outlined another ambitious product campaign and, this time, it appears to have the resources to pull it off, the Evija set to put a halo around the effort. “The perfect way to start a new chapter in this iconic company’s history,” suggested CEO Popham. 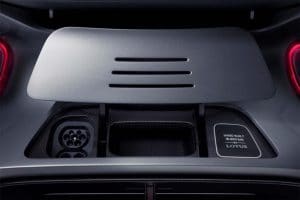 Lotus also claims Evija will set a record in terms of recharging times.

Under Chapman, Lotus adopted the mantra, “simplify, then add lightness,” something clearly visible in its aging line-up of models like the little Elise. The Evija will feature a carbon fiber chassis and, even with subframes, it weighs in at just 284 pounds. Still, it’s a little more difficult to pull together a lightweight 200 mph electric supercar, if for no other reason than the mass of the battery pack. All in, the Lotus Evija tips the scales at 3,703 pounds.

To help offset that, Lotus designers have put a premium on aerodynamics. They’ve even gone with cameras to replace conventional mirrors. One pops out from each of the front fenders while a third, mounted on the roof, replaces the mirror normally mounted on the windshield. There’s also a rear wing that pops up in Track Mode, or on the driver’s command.

The battery pack itself comes from Williams Advanced Engineering, the same company that produced the pack for the first-generation Formula E race cars. It’s relatively modest in size, at 70 kilowatt-hours just 10% bigger than what’s found in the mundane Chevrolet Bolt EV. But engineers put a focus on “power density,” the amount of energy that can be put into, and then taken out of, the batteries in short order. At peak, the batteries can punch out a whopping 2,000 kilowatts, or more than 10 times more than what a typical U.S. home can handle. 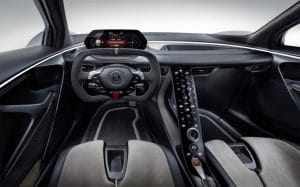 That’s directed to four motor-generators, one per wheel and each able to produce about 493 hp and 314 pound-feet of torque. Don’t reach for your calculator. That works out to 1,971 hp and 1,245 lb-ft.

One downside of battery drive technology is that it can produce a lot of heat when pushed to the extremes, so Lotus cautions that Evija will only be able to run flat-out on a track for seven minutes before needing to cool down. Still, it is an impressive system.

“With the Lotus Evija, we have an extremely efficient electric-powertrain package, capable of delivering power to the road in a manner never seen before,” said Matt Windle, Lotus Cars’ executive director of sports car engineering. “Our battery, e-motors, and transmission each operate at up to 98% efficiency. This sets new standards for engineering excellence.”

(Lotus is planning to start building cars in China. How does that play off its English heritage? Click Here for the story.)

As we noted, batteries designed for high power density not only pump out energy fast but also can take it in quite rapidly. Lotus claims Evija has “the world’s fastest charging battery.” Fully drained it could be back up to 80% capacity in just 18 minutes. That claim may not last long, however. The new Porsche Taycan will be able to plug into next-generation 800-volt, 350 kW Level 3 fast-chargers that should yield times of around 15 minutes, that manufacturer claims. But there’s no question that the two brands are moving in the right direction. 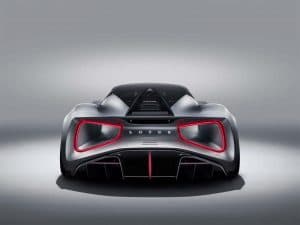 (Geely is ready to plow nearly $2b into Lotus revival. Click Here to see what’s in store.)

The Evija is expected to deliver 250 miles per charge, according to Lotus, but that’s using the European WLTP test cycle. Expect something just north of 200 miles range if the electric hypercar ever makes it to the U.S. And, if it does, we’ll have to wait to see what happens with those camera mirrors, as that technology has yet to win approval from the National Highway Traffic Safety Administration, though regulators are now considering that alternative.

Evija was designed to compete against a growing list of electric supercars including the Rimac C Two and Pininfarina Battista, as well as the upcoming Tesla Roadster. It will certainly play in exotic territory when it comes to pricing. Look for a figure of around 1.7 million British pounds, or $2.1 million. Incidentally, production is set to be limited to just 130 vehicles, matching the car’s official designation as the Lotus Type 130.