Special edition will give buyers a chance to “feel like they’re at Le Mans.” 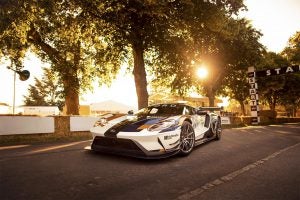 Mystery solved! The 2020 Ford GT MK II made it’s debut at the Goodwood Festival of Speed.

During the last couple weeks there has been plenty of speculation about a teaser image Ford sent out. There was no question it was a GT supercar, but what precisely did the automaker have in store? Was it a new version of the GT race car that recently ran at the 24 Hours of Le Mans? Or was it a new model for retail buyers?

The answer? Yes. Well, sort of. Turns out, this special edition, of which only a small number will be produced, is targeted at customers who can pony up more than $1 million for a supercar that’s not street legal but designed specifically for track use, explained a Ford official, “so they can feel like they’re at Le Mans.”

Like both the street and track models now in production, the GT Mk II is a joint development effort of Ford Motor Co. and Multimatic, the Canadian automotive supplier that produces the carbon fiber and aluminum beast.

What could prove particularly enticing to well-heeled buyers is that the special edition makes no compromises needed to comply with specific track or race series rules. 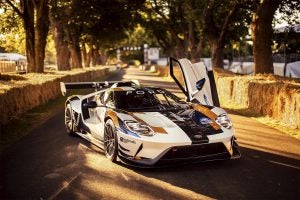 “The GT Mk II unleashes the full performance potential of the Ford GT without any artificial performance limitations dictated by racing sanctioning bodies,” said Hau Thai-Tang, Ford chief product development and purchasing officer. “It’s the closest GT owners can get to the Le Mans-winning performance and exhilarating feeling of crossing the finish line in the Ford GT race car.”

Right now, that means the current race version of the GT loses about 150 horsepower when compared to the street model. Of course, that version faces its own limitations due to “homologation,” the need to comply with government safety, fuel economy and emissions regulations.

“The true off-the-hook performance capability of the GT hasn’t yet been fully showcased,” said Multimatic’s Chief Technical Officer Larry Holt, adding, “The Mk II answers the regularly asked question of how would the car perform with all the limitations lifted: the answer is spectacularly.”

The Ford GT Mk II starts off much like the Le Mans race car, but it adds the dual-element rear wing that was the most prominent feature in the teaser image. To balance out the wing, the car also gets a front racing splitter and diffuser, as well as new fender louvres and dive planes. All told, Ford and Multimatic claim these aerodynamic updates increase downforce by a spectacular 400%. 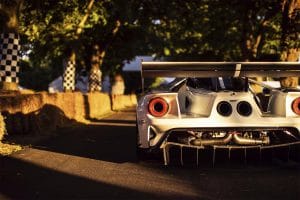 The Ford GT Mk II starts off much like the Le Mans race car, but it adds the dual-element rear wing — a prominent feature in the teaser image.

The Mk II gives up the street model’s adjustable ride height and drive modes. But that contributes to a whopping 200 pounds in weight savings. The car gets new, five-way adjustable DSSV shock with a lower, fixed ride height.

Those and other tweaks, including the use of Michelin Pilot Sport racing tires mean the GT Mk II will help the car to deliver up to 2Gs of lateral grip, while also being more agile in corners.

As to power, Ford notes in a statement that the Mk II “features the 3.5-liter EcoBoost engine that powers both the Ford GT race car and the road car but since the Mk II is not limited by any racing sanctioning body it is able to generate 200 horsepower more than the race car, making the Mk II the most powerful version of the Ford GT. The 3.5-liter EcoBoost is paired with the same seven-speed dual-clutch transmission from the Ford GT but specially calibrated for this track-exclusive application. 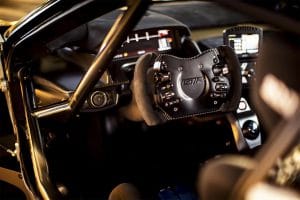 The interior of the GT MK II is closer to race car than street car.

To keep the engine cool as it’s blazing down the track – or up the hill at the Goodwood Festival of Speed, where it made its debut today, the GT MK II increases cooling capabilities with “a high capacity air-to-air outboard mounted charge air cooler with water spray technology,” Ford adds. “The water spray automatically activates in high temperature situations to provide cooling by applying atomized water on the charge air cooler allowing the Ford GT Mk II to maintain a consistent level of power at high temperatures.”

The other major update, visible in the original teaser image, is the roof-mounted air intake that helps feed the car’s auxiliary engine, clutch and transmission coolers. Now, add a track-ready roll cage, steering wheel and instrumentation, and buyers will be ready to roll – if they can stroke a check for a starting price of $1.2 million, that is.

Only 45 of the Ford GT MK II models will be produced, on top of the total run of 1,350 GTs that Ford originally committed to, with 250 of them rolling out each year.