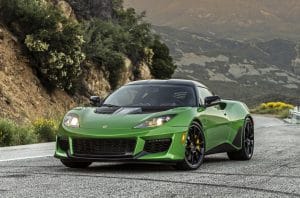 Lotus continues its revival with the introduction of the new 2020 Evora GT, which is described as its fastest car ever for the North American market.

The new Evora replaces the Evora 410 and Evora 400 and comes just weeks after the company rolled out $2 million Evija, the company’s first-ever electric super car. The beast produces 1,900 horsepower and hit 60 mph in less than three seconds, and tops out at more than 200 mph.

The new Evora isn’t quite the snarling creature that the Evija will be when it arrives next year, but it’s a Lotus nevertheless. Laden with carbon fiber and a sleek exterior the new model offers plenty of speed, sprinting from 0-to-60 mph in just 3.8 seconds.

The coupe weighs in at a little more than 3,100 pounds and is powered by a 3.5-liter supercharged six-cylinder engine putting out 416 bhp and 317 lb-ft. The automatic enjoys a little more torque, 332 lb-ft, and does the run to 60 mph in about the same time, Lotus reveals.

As with all Lotus sports cars, aerodynamic downforce is also a requirement and this new GT-class coupe generates up to 64 kg of downforce, which is double that of the Evora 400 and makes it the new benchmark when compared to rivals. 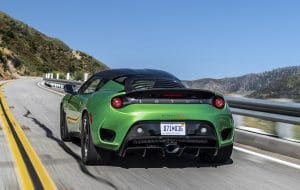 The Evora GT is priced at $96,950 and is available in the United States and Canada.

The additional downforce is created by the efficient management of airflow under and over the car. A front lip, mounted beneath the lightweight composite grille mesh grille, reduces undercar airflow, front wheel arch air louvres and sculptured carbon fiber ducts behind each rear wheel vent high pressure air from the wheel arches and a motorsport-derived rear diffuser all contribute to increasing downforce front and rear, the company notes.

Curved lower A-panels smooth airflow along the sides of the car, reducing drag. All of this means the Evora GT to the top ranks of Lotus’ most aerodynamically efficient road cars.

(Lotus Goes Electric — But Will That Spark the Brand’s Revival?)

In addition to Lotus’ slick, six-speed manual gearbox with a Torsen type limited slip differential (LSD), the Evora GT is also available with an automatic transmission option. Quick shifting through the gears via lightweight aluminum paddles mounted to the steering wheel contributes to a 0-60 mph time of 3.8 seconds. 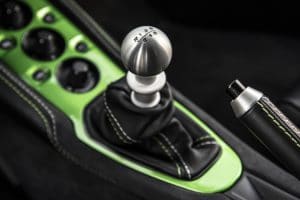 The new Lotus Evora GT is powered by a 3.5-liter supercharged V6 putting out 416 hp.

For the interior, the dashboard, door panels, transmission tunnel and center console are all trimmed in black Alcantara, complemented by contrast twin color stitching (bespoke leather is an option).

The lightweight magnesium steering wheel is clad in leather and Alcantara, the instrument binnacle cover is carbon fiber, as are the backs of the Sparco race seats. An integrated 7-inch touch-screen infotainment system with Apple CarPlay and Android Auto, Bluetooth functionality, satellite navigation and reversing camera is also standard.

(Lotus to Build Cars in China)

Additionally, buyers can opt for Lotus-designed, ultra-lightweight, forged aluminum wheels (19-inch 8J front and 20-inch 10.5J rear 10-spoke alloy wheels) in diamond cut satin black or red. The new Evora GT can be ordered now and has an MSRP of $96,950.