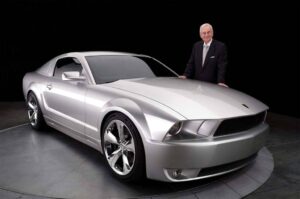 Former Ford and Chrysler executive Lee Iacocca’s impact on the auto industry is far reaching. He died at age 94.

Hailed as the savior of Chrysler Corp. as well as the father of the Ford Mustang Lido “Lee” Iacocca died Tuesday morning, according to multiple reports, though specific details have not been released.

Iacocca, who was 94, was an icon within the automotive industry. He first rose to prominence at Ford Motor Co. in the mid-1960s when he pushed for the development of the Mustang. The car is now the best-selling sports car in history.

Known for being strong willed, he was forced out at Ford after repeated run-ins with company heir Henry Ford II in the mid-1970s. He moved on to Chrysler Corp. as president and chief executive officer in 1978, adding the chairman’s title in 1979.

He brought the company back from the brink of bankruptcy, convincing Congress to provide loan guarantees to banks loaning the automaker more than $800 million. The strategy worked with Chrysler paying the loans back early.

He brought the company back on the strength of a new line-up of simple models called K-cars. He also ushered in another transformative product that was being developed during his time at Ford: the minivan. No vehicle – outside of the Beetle and Volkswagen – is more identifiable with an automaker as the minivan is with Chrysler. Iacocca stayed with Chrysler as chairman until 1992. However, in 1995, he joined Las Vegas billionaire Kirk Kerkorian, attempting to engineer a hostile takeover of the automaker that failed.

The two sides reconciled later with Iacocca resuming his role as pitchman for the company.

Famous for his commercials touting Chrysler products, he gained the trust of enough people in the U.S. to contemplate a run at the U.S. presidency. The campaign never really got far, but it revealed just how likeable Iacocca was.

In his later years, Iacocca became involved in a variety of projects, including his own spaghetti sauce and his foundation that focused on funding diabetes research. The cause of death is unknown.