Founder of EDS clashed with GM management before taking on political establishment. 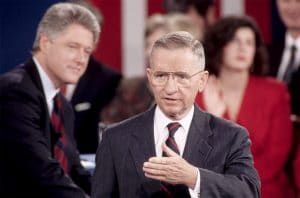 Ross Report made his biggest splash on the national political stage, running a 1992 White House campaign that briefly polled higher than either George H.W. Bush or Bill Clinton, shown here on Perot’s right.

Roger B. Smith was intent on transforming General Motors but when he began hinting that he had a “lulu” of a deal in the works, few could have anticipated what was coming, least of all the GM chairman and CEO.

Instead of acquiring another car company or launching a new brand – as Smith later did by creating Saturn – he wound up spending $2.55 billion to purchase the Texas-based financial services company EDS from its founder, H. Ross Perot. But the deal, meant to make GM a leaner, more efficient manufacturers, wound up creating nothing but turmoil that ultimate resulted in it paying Perot millions more simply to go away.

Perot, who later went on to make two bids for the White House, while creating another tech firm he eventually sold to computer company Dell, died Tuesday morning at the age of 89.

With his buzz cut, Texas drawl, folksy manner and a pair of jug-handle ears that even he joked about, Perot proved a powerful force, whatever he turned to. Born Henry Ross Perot on June 27, 1930, in Texarkana, Texas, he went on to the U.S. Naval Academy and a stint in the Navy before entering the still-new world of data services in 1962.

In an era when microprocessors were still the stuff of science fiction, Perot’s Electronic Data Systems became an early powerhouse providing both data services and hardware. That seemed precisely what was needed by GM which, under Smith, was spending tens of billions of dollars on new factories and robots. But the 1984 acquisition quickly began to unravel.

Becoming GM’s single-largest shareholder as part of the deal, Perot had an inside look at a company that was bleeding market share and hemorrhaging cash, and he didn’t like what he saw. ““At EDS when we see a snake we kill it. At GM they appoint a committee to study snakes,” he declared at one point, while also saying there was a need to “blow up” the automaker’s management system and start all over.

It was the sort of talk that the autocratic talk Smith couldn’t tolerate and, after numerous attempts to win Perot over and, later, to try to silence him, GM gave up. It worked out a lavish payout package for Perot and several other senior EDS executives. The move was derided as “greenmail” by the carmaker’s critics, and Perot himself didn’t seem to disagree, even offering the GM board the opportunity to reverse itself on the buyout. In a statement issued after the move was locked in place, Perot had the final word. 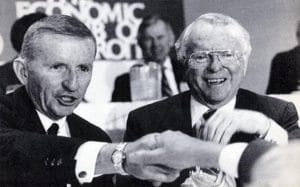 “At a time when GM is closing 11 plants, putting 30,000 people out of work, cutting back on capital expenditure and having problems with profitability,” he declared, “I have just received $700 million from GM in exchange for my Series E stock and notes.”

On top of the money he got for the original sale of the company, it was a heft payoff for Perot, who originally founded EDS for $1,000.

Under GM, the data firm continued to grow, even as its auto operation struggled. By 1990, it had global revenues of $5 billion and a workforce of 45,000. But in 1995, the automaker move to completely put the stormy chapter behind it, spinning EDS off. In 2008 the data firm was purchased again, this time for $13.9 billion. The name, EDS, disappeared a year later, the company being redubbed Hewlett Packard Enterprise Services.

For his part, Perot started up another data company, the eponymous Perot Systems, which was also the subject of a multi-billion dollar acquisition, Dell acquiring it just a year after HP purchased EDS.

Had GM and its chairman done a little homework they might have avoided their battle with Perot. The former Navy man wasn’t one to let others take control. When two EDS employees were arrested in Iran in 1978, Perot hired a former Green Beret to organize a rescue effort. The team of one-time commandos helped organize an attack by Iranian revolutionaries on the prison where the two men were being held – as author Ken Follett revealed in his non-fiction book, “On Wings of Eagles.” Once freed, they and many of the company’s other Iranian workers were quickly flown out of the country. 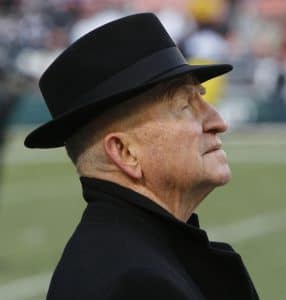 Perot in 2006. He ultimately sold both of data services companies, earning billions in the process.

While the battle with GM gave the short Perot a tall pedestal, he proved himself a truly tall order when he decided to throw his Stetson into the ring in 1992, largely self-funding a third-party bid for the White House. At one point, polls showed him leading both Bill Clinton and George H.W. Bush in the race. But Perot briefly pulled out – subsequently claiming GOP operatives had threatened to disrupt his daughter’s wedding if he didn’t. He never fully recovered after re-entering the campaign but still managed to collect 19% of the popular vote, a strong showing for an independent candidate.

Perot didn’t fare nearly as well in his second campaign and then swore off politics. But he remained outspoken on a variety of subjects until his final years.

Perot was never afraid to use his wealth, at one point spending $1.5 million to buy a 700-year-old copy of the Magna Carta. He eventually sold it for more than $21 million.

Perot’s politics were a mix of mostly Conservative and populist political leanings — he famously opposed the North American Free Trade Agreement by warning of a “giant sucking sound” as manufacturing jobs fled to Mexico in search of cheaper labor. But Perot was outspokenly pro-choice and a strong supporter of Planned Parenthood. He also echoed billionaire Warren Buffett in calling for increased taxation of the rich, while also demanding a pay-down of the national debt.

Perot is survived by his wife of 53 year, Margot, and five children and their families.