Last 60 employees shift to other jobs at the company. 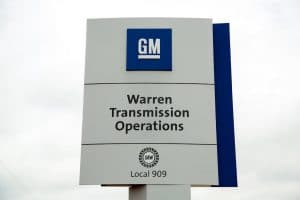 General Motors’ Warren (Michigan) Transmission plant will close this week, the automaker confirmed, after the few remaining employees in the plant fill out orders for replacements parts.

The plant will move into an unallocated category now occupied by GM’s plants in Baltimore, which ceased operations and May and the Lordstown (Ohio) assembly plant, which shut last March.

GM’s Detroit-Hamtramck assembly plant is scheduled to cease operations early next year. The fate of all four U.S. plants will depend, in part, on the outcome of GM’s negotiations with the United Auto Workers, which is vowing to find a way to keep the plants open.

GM said in an e-mail that it had jobs available for all 60 employees remaining inside the Warren plant, which is closing Aug. 2.

“The 6-speed transmission was a good product and was built with tremendous pride by the Warren team. We know this is an emotional time for our Warren Transmission team members,” the GM statement added.

“We appreciate their commitment and hard work to build the highest quality possible into each and every transmission produced at Warren Transmission Operations. Our focus remains on the employees and the impacted communities. We have job opportunities for all hourly employees at the impacted plants. 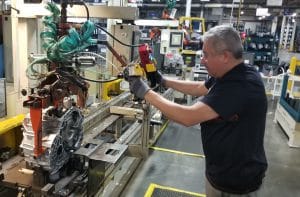 GM’s Warren Transmission hourly team is down to 60 employees, who will be moving to other jobs when the plant closes later this week.

“These are highly-skilled employees and we want them to stay with the company. We have now placed more than 1,700 employees (out of 2,800) from our unallocated plants to other GM locations. Our goal is to build a strong future for our employees and our business.”

The UAW, however, used the impending shutdown to underscore the human cost of GM’s decision and to demand the company invest in the U.S. rather than Mexico and China.

“They chose not to give us a new job. Instead they chose to invest in Mexico and China,” said Ghana Goodwin-Dye, the president of UAW Local 909, which represents workers at Warren plant.

“Its been very difficult,” said Goodwin-Dye, who has worked at Warren Transmission for more than 30 years. “We’re a family. That’s what GM does, they separate families,” added Goodwin-Dye, who noted that dozens of workers from the Warren plant are now required to transfer to other GM plants, including: Bowling Green, Kentucky; Fort Wayne, Indiana; Arlington, Texas; or Flint, Michigan.

Other employees have elected to retire rather than uproot their families, noted Goodwin-Dye, who noted the same process is being repeated at other GM plants such as Lordstown and Baltimore that have already ceased operation.

Goodwin-Dye added prior to the November announcement, she repeatedly asked GM’s management guidance on the company’s future plans. “We did everything they asked,” she noted but the company kept saying no new products were coming.

Meanwhile, employment in the plant continued to decline from roughly 700 when the last contract was signed in 2015. But as older workers retired, they weren’t replaced, and the workforce dwindled to 265 when GM made its restructuring announcement in November. 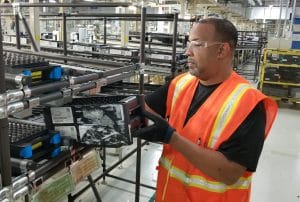 Warren Transmission’s UAW Local 909 has been critical of GM’s handling of the plant’s closure..

Goodwin-Dye, with contract talks now underway, has been assured the union will press GM for new investment in the plants that are now unallocated. The current contract expires Sept. 14.

New investment, however, may not come in time to protect workers from Warren and Lordstown because workers are being asked, in many cases, to transfer in the next several weeks.

“This closure is a very hard pill to swallow,” said Danielle Murray, a Local 909 member will have to move her ailing mother when she finally moves to Texas or Kentucky and leave behind the new home she had purchased last fall before GM made the decision to shutter the Warren plant.

GM’s plant closings have drawn the ire of President Donald Trump and a cross-section of Democratic and Republican Congressmen.

Tom Perez, the former U.S. Secretary of Labor, who is now chairman of the Democratic National Committee, also vowed that the GM plant closing will be an issue throughout the 2020 Presidential campaign.

Trump promised when he campaigned in Warren back in 2016 that the loss of manufacturing jobs would end if he was elected. “Those were his words not mine,” said Perez during a press conference across the street from the Warren plant. However, Michigan has fewer manufacturing jobs now than it had in 2016, Perez added.