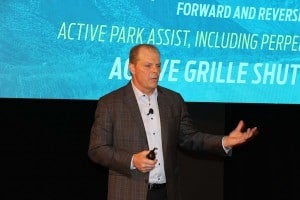 Ford Sales VP Mark LaNeve noted the company’s sales were down 4.1% in June.

Ford Motor Co. reported its sales dropped 4.1% in June as the company continued its long retreat from the passenger car business and sales of utility vehicles slipped as it makes the transition to the production of new models.

“In a very competitive market, we grew our total pickup segment share in Q2, and we have extended F-Series’ leadership this year and now with the Ranger introduction we have further broadened America’s best-selling line-up,” said Mark LaNeve, Ford vice president, U.S. Marketing, Sales and Service.

“We also began selling our all-new Explorer at the end of the quarter. With the Explorer and the all-new Escape coming soon, we are on track to have the freshest SUV line-up in the industry by year’s end.”

(Despite a Drop in Interest Rates by Automakers, Sales Fell in June)

LaNeve also noted said Ford’s numbers were clearly hurt by phasing out sales of the Taurus and Fusion.

Ford has already upped the production run of the new Ranger due to its popularity. It made a difference in sales during the second quarter.

“If you excluded Taurus and Focus, Ford sales would have been up 3%,” he said during a conference call with analysts. “We’re well on the way to selling a million pickup trucks in the U.S. for the first time since 2005.”

Ford released its sales figures for the second quarter the day after the most carmakers announced sales figures for June. Overall, new vehicles sales were down 1.8% during as the SAAR was 17.4 million units. Sales for the first half of the 2019 were down 2.3% in line with estimates from most analysts.

By the numbers, Tesla appeared to post the biggest sales increase with 127% during June and by 76% for the first half of the year, according to an estimate.

Hyundai, Kia, Subaru and Mitsubishi, Volkswagen, Porsche and Volvo all reported sales increases for June. But the Toyota, Honda and Nissan, the Japanese “Big Three” saw their sales dropped more than the overall decline in industry sales in June.

BMW also boosted its sales increase during June as did Mercedes-Benz, but BMW has managed to build up a lead for the first-half over its German rival, which has led in luxury sales in the U.S. for the past few years.

Patrick Manzi, senior economist with the National Automobile Dealers Association, observed, “Sales have declined relative to 2018 each month this year, but overall, not more than we expected. Transaction prices on both cars and light trucks continued to rise and set new records.”