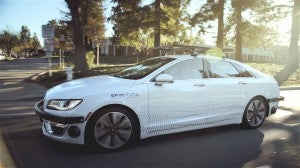 Another electric vehicle start-up, Seres, is facing tough times, forcing the Chinese-backed to delay the launch its vehicle in the U.S. and layoff much of its staff here.

Earlier this year, the company changed its name from SF Motors to Seres and unveiled its first production car, the SF5. The company is owned by China’s Sokon Industry Group. It has been growing its business largely through acquisitions.

It had a founding member of Tesla, Martin Eberhard, on its team through its purchase of InEVit, an EV battery modularization startup. However, Eberhard and a several other employees reportedly left the company earlier this year. The group is reportedly putting together its own battery-electric car using a similar platform to the one at Seres.

According to The Verge, they are laying off 90 people and putting the introduction of the SF5 on hold in the U.S. Co-CEO James Taylor blamed the slowdown in the Chinese market for the actions taken in the U.S., saying the company needed to fix problems in China before it can focus on the U.S.

“At a time when Sokon is managing so many dynamic challenges, it is simply too much in the short term to also attempt to launch a new brand and product type in another new market,” he wrote in a letter to employees. “With these strategic decisions made, we must now make appropriate adjustments to give the company its best opportunity for both short-term survival and long-term success.”

Seres isn’t the only nascent EV maker to face these kinds of problems so close to its production run — Faraday Future has been the poster child for this sort of problem.

The California-based company has had nearly as many lives as cat in recent years. The company was teetering at the edge of insolvency – in fact one of the founders used those words exactly to describe it – but was brought back from the brink by additional investment.

It laid off much of its staff, but its FF1 is still alive and the company is bringing some employees back into the fold as its trudges forward in another attempt to launch the EV using a factory in Hanford, California.

Seres made a big splash in the U.S. when it bought the former AM General plant in Mishawaka, Indiana, in 2018. It also has a plant in Chongqing, China, and plans to build vehicles there as well. The company claimed to be the only autonomous EV maker to have plants in both China and the U.S.

The company has research and development facilities in China, Germany and the United States, while the company’s corporate headquarters is in Santa Clara, California. In December 2017, the company secured approval from the State of California to test autonomous vehicles.

“On the heels of receiving our autonomous vehicle test permit in California, we believe this is the ideal time to begin putting our research to the test as we prepare to unveil our intelligent electric vehicles equipped with advanced autonomous and connectivity systems,” said CEO John Zhang at the time.