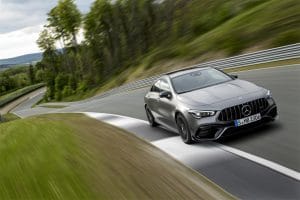 The new 2020 Mercedes-AMG CLA 45 is the fastest small sedan in the automaker’s line-up.

The original, 2013 Mercedes-Benz CLA was a break-out vehicle for the German automaker. With its sleek, coupe-like styling, and a base price starting just under $30,000, the sedan quickly scored the most successful launch of any new model ever for Mercedes’ U.S. arm.

In January, the carmaker rolled out an all-new version of the CLA and now, a half-year later, it’s adding a new take on the high-performance Mercedes-AMG CLA 45. Equipped with a new, 2.0-liter turbocharged engine, it will be the fastest and most powerful model the company has introduced in the small sedan segment, capable of launching from 0 to 60 in just 4.5 seconds, on the way to a top speed of 155 mph.

The question is whether the AMG version can add some much-needed life to the CLA nameplate. At its peak, Mercedes was selling about 30,000 of the coupe-like sedans annually in the U.S. For the first half of this year, it moved just 6,942, a more than 40% decline, even after rolling out the new, second-generation model.

That, of course, reflects the escalating shift from sedans, coupes – and coupe-like sedans – to SUVs, CUVs and other light trucks. As recently as 2015, the CLA handily outsold the GLA crossover that shared its underlying platform by nearly 5,000 units, or 20%. So far, this year, GLA sales are running about 50% over those for the CLA. 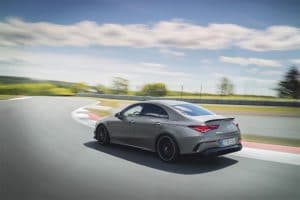 A new stiffer frame has improved the ride and handling of the AMG CLA 45.

For those passenger car fans still left in the luxury market, there’s plenty to like about the new CLA, both base and high-performance models. Not only are they more stylish, but Mercedes has set out to address some of the key weaknesses of the gen-1 models, notably they’re chunky ride and clunky gearboxes.

All versions boast a new look for 2020, albeit one that won’t shock or surprise those familiar with the original, coupe-like offering. The CLA 45, in particular, adopts a version of the familiar AMG grille, including its 12 vertical louvers.

The CLA’s “shark nose” sits lower than before, and with the new tires, side sills and flared wheel arches, gives the car a more firmly planted and aggressive stance.

The CLA 45 also gets bigger air inlets to feed the turbo engine, and aerodynamic detailing, such as front splitter and air inlets ahead of the front wheels, minimize drag and increase downforce to keep the CLA 45 stuck to the ground under hard acceleration. 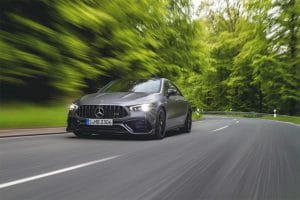 The question is whether the AMG version can add some much-needed life to the CLA nameplate.

Like all AMG models, each of the new 2.0-liter engine is produced by one technician. It is the most powerful engine Mercedes has ever offered in a vehicle of this size. Power is delivered to all four wheels, though the 4Matic+ system normally pushes torque to the rear wheels to enhance performance.

(Nothing mild about Mercedes’ first mild hybrid, the GLE 580 4Matic.)

Buyers can opt for an adaptive ride control suspension, meanwhile, capable of switching each individual damper from soft to firm, or anything in-between based on road conditions and driver input.

Handling is also enhanced, the Germans claim, by significantly stiffening up the new CLA’s body.

The interior is lavished with leather and synthetic suede and features a driver-oriented layout. It also gets the new MBUX infotainment system which operates much like the Amazon Alexa voice assistant, allowing a driver to control things with more natural speech. 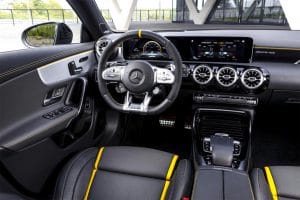 The interior is lavished with leather and synthetic suede and features a driver-oriented layout.

Mercedes remains committed to the passenger car market and, in particular, coupe-like models – for now. Whether it does for the long run could very well depend on whether the AMG edition can deliver the steroid boost the CLA needs. Of course, Mercedes isn’t alone. It’s anyone’s guess what will become of that models two key competitors, the Audi RS3 and the BMW M2, over the next several year.

Mercedes won’t release fuel economy numbers or pricing for the 2020 CLA 45 until closer to its U.S. launch later this year. The outgoing Mercedes-AMG CLA 45 carried a starting price of $53,100.