Bentley Offers Glimpse of its Future with EXP 100 Centenary Concept

Autonomous, electric and “smart,” it even uses sustainable materials, like paint made of rice husks. 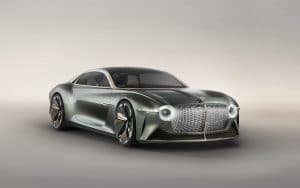 Gone are the days when concept cars were little more than fantasies in chrome, or so says Bentley, which is billing its EXP 100 as a rolling research lab that “represents the kind of cars we want to make in the future,” according to design chief Stefan Sielaff.

Substantially lighter than today’s models, using an all-electric drivetrain, “leather-like” textiles, and an exterior paint derived from rice husks, the EXP 100 aims to show that even the most luxurious of vehicles can be “sustainable,” without having to give up the sort of features that “2-percenters” have come to expect from their vehicles. The drivetrain, for one thing, can launch the concept – which is a full nine inches longer than today’s flagship Mulsanne sedan – from 0 to 60 mph in a mere 2.5 seconds, while yielding about 440 miles per charge.

Unveiled this morning as part of Bentley’s centenary celebration, the EXP 100 is meant to “demonstrate our vision of the future of the marque,” said Adrian Hallmark, the chairman of the most exclusive of parent Volkswagen AG’s 11 passenger car brands. It is, he added, a “grand tourer designed to demonstrate that the future of luxury mobility is as inspirational and aspirational as the last 100 years.”

There are some traditional Bentley cues, notably the “Flying B” hood ornament, but even that gets a futuristic treatment, as does the concept’s massive grille. Though it measures 228 inches in length and 94 inches wide, the concept GT weighs in at a “mere” 4,180 pounds, about 1,800 lbs less than the smaller Mulsanne. It does sit lower and opts for a sweeping, coupe-like roofline, with flared fenders intended to emphasize the car’s raw power. 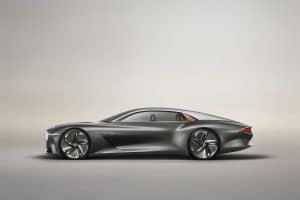 The Bentley EXP 100 is an electric concept vehicle that can take an 80% charge in 15 minutes.

While Bentley’s news release doesn’t provide many details about the driveline, its battery pack, the marque claims, is lighter and more energy-dense than those in use today. It would provide about a third more range than the longest-range version of the Tesla Model S, apparently without adding more weight. Mass is everything when it comes to both range and performance, so Bentley engineers opted for aluminum and carbon fiber, rather than steel, for the EXP 100.

The battery pack delivers current to four electric motors, one for each wheel. That translates into an electric all-wheel-drive system that also can torque vector, reducing power to the inner wheels when cornering, while sending up to 50% more power to the outer wheels. The automaker hasn’t revealed the horsepower of the system but claims it can deliver up to 1,100 pound-feet of torque.

The battery-pack, meanwhile, can get an 80% recharge in just 15 minutes. That would indicate it can draw up to 350 kilowatt-hours at 800 volts, the same peak charging system developed for the new Taycan developed by sibling brand Porsche.

The EXP 100 is one “smart” car. Its active aero wheels can adapt to road conditions and driver input, Bentley claims, and the tires can adjust their contact patches, as well. 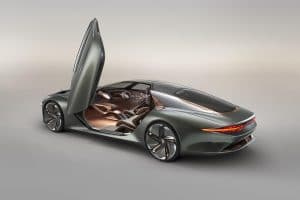 The EXP 100 would ideally be as good at being driven as it is driving autonomously.

The EXP 100 uses artificial intelligence in a number of ways, among other things, pairing it with biometric seat sensors that can control cabin temperature, seat position and even tell when a driver might be getting drowsy. Integrated into the car’s Amazon Alexa-style voice assistant, the system can even track what a passenger is looking at and display information about what they’re seeing outside the vehicle.

The concept car is designed to operate both in manual mode, “for when one wishes to enjoy the thrill of driving,” the carmaker said, and in fully autonomous mode. That technology is still in its infancy. Near-term, Bentley products – like those of other VW Group brands – are expected to begin phasing in more and more advanced, semi-autonomous driving systems.

The EXP’s seats, incidentally, can swivel when the car is being operated in autonomous mode, to create a mobile living room.

A virtually all-glass roof gives passengers a panoramic view of the outside world. The car’s four seats have a Jetson’s like quality to them, befitting the high-tech nature of the EXP 100. The interior features lighting that can be extensively customized for the moment and the mood. 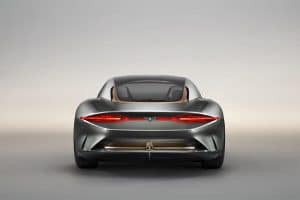 The new Bentley concept, as much as anything, is intended to showcase new technologies, as well as the brand’s shifting approach to interior design, company officials told CNBC. That includes using sustainable alternatives, like synthetics claimed to mimic the look and feel of traditional, luxury materials. That doesn’t mean phasing out leather and wood entirely. The EXP 100 features copper-Infused Riverwood, a sustainable wood from naturally fallen trees that has been preserved for 5,000 years in peat bogs, lakes and rivers,” Bentley noted.

Air purification systems aren’t unique these days, but the EXP 100’s feeds air vents that, Bentley says, “undulate, giving the appearance that the car is breathing and alive.”

There are plenty of traditional Bentley touches, many given a high-tech feel, such as the system that automatically dispenses purified water and the crystal glasses that can also be used for a bottle of chilled champagne.

Don’t expect to see the EXP 100 in showrooms. With its massive gull-wing doors, it’s purely a prototype. But, Bentley officials suggest, a number of features from the concept will appear on future models. In particular, the list seems likely to include the electric drivetrain, even if it doesn’t offer the next-gen battery pack found in the centenary concept. 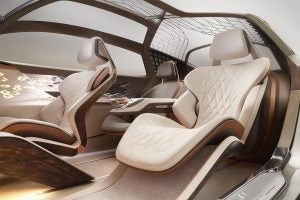 The interior of the Bentley EXP 100 features specially harvested wood.

Like other super-premium luxury brands, Bentley faces numerous challenges, notably global emissions and fuel economy mandates, such as China’s New Energy Vehicle, or NEV, standard that encourages buyers in Bentley’s largest market to shift to zero-emission vehicles. Bentley has only partly addressed that with the plug-in hybrid version of Bentayga.

That’s one reason the marque saw demand dip to around 9,560 vehicles last year, the second consecutive annual decline after hitting a global peak of 11,300 vehicles in 2016.

Bentley is hoping that the EXP 100 – and the cars it influences – will help it begin its second century with another growth spurt.