Power, comfort and control make for an awesome ride. 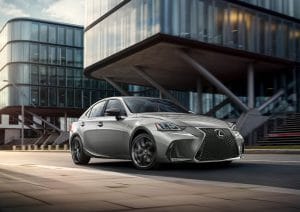 The 2019 Lexus IS 350 F-Sport offers luxury in a powerful performance package.

Unpretentious is a word that seems to have dropped from the American vocabulary, but all the same Lexus has earned a reputation for delivering a comfortable brand of luxury vehicles of peerless quality that are also tasteful and smartly equipped.

But in recent years, Lexus, Toyota’s luxury marque, also has been experimenting with adding more bite to its model line with a series of “F-Sport” vehicles that are specifically designed and equipped to be sportier, racier and more adventurous than the traditional sedans, coupes and utility vehicles that Lexus has brought to market with great success during the past three decades.

The IS, a sporty midsized sedan that faces off directly with the BMW 3-Series and Mercedes-Benz C-Class, has been part of the Lexus portfolio for the past 20 years.

However, the 2019 IS 350 with the F-Sport package is a unique vehicle with a character all its own when it’s sitting at the curb and particularly when it’s in motion. It neatly blends power, performance, stability and impressive driving dynamics into an impressive package.

The IS 350 F-Sport’s combination of performance, ride comfort and agility is also something of a surprise given Lexus’ traditional emphasis on comfort and ease. But after driving the IS 350 both on crowded streets, open roads and busy freeways, I can say it is great fun to drive. It never seemed to pause or to hesitate, rounding a curve, climbing a grade or during a passing maneuver.

For one thing, the power is delivered instantly so you can swiftly and cleanly move around slower traffic without batting an eye. The steering is as crisp and responsive as you would find in a sports car and brakes come on in an instantly when needed and help balance the car’s overall quickness and agility.

The IS 350 maintains Lexus trademarks such as the quiet cabin and ample safety features. It also benefits from the sleek exterior styling of the IS line with its swept-back silhouette. For 2019, the IS offers a new look up front with optional triple beam LED headlights and the F-Sport package includes a number of unique touches such as F-Sport badge, which isn’t flashy but isn’t exactly understated either.

At the rear, the Lexus IS having a refined look with “L”-shaped LED taillights. The car’s sporty character is further emphasized by the chrome exhaust tips.

The all-wheel-drive system also does well on slick surfaces of which there were many in recent weeks and the IS also comes equipped with selectable drive modes, including normal, comfort and sport.

The heart of the powertrain in the IS 350 F-Sport is a 3.5-liter V6 produces 311 horsepower and 280 foot-pounds of torque. The AWD version of the IS 350 sends power through a six-speed automatic. The overall power-to-weight ratio is most impressive, giving the car its quick and agile character.

The F-Sport package offers more handling capacity through special suspension tuning 18-inch wheels and an optional adaptive variable suspension that you could feel working in test vehicle I drove.

Lexus has seemed to underperform in interior design in recent years, particularly in areas such as material selection where an emphasis on cutting or limit costs has taken a bite out of styling.

The F-Sport package, though, includes special touches throughout the cabin that help set that elevates the interior of the IS 350 such as the instrumentation inspired by the LFA, Lexus’s widely acclaimed concept vehicle which was designed with a driver-centered cockpit.

The IS F-Sport package also features a Dark Gray streamline interior trim that I found very handsome and as well as heated and ventilated sport seats as well an all-black headliner, aluminum pedals and leather trimmed shift knob and steering wheel.

Side mirrors with integrated turns signals, puddle lamps and a power moonroof are also part of the package.

Lexus also works diligently at keeping up with the swift changes in the technology both for safety and for driver convenience, connectivity and entertainment.

Since it first arrived in the U.S. in 1989, Lexus has always emphasized entertainment.

Lexus Enform Remote mobile app lets you lock and unlock doors, start the engine and climate controls, check the fuel level, and more all through your smartphone, smartwatch or Amazon Alexa–enabled devices at home.

The IS 350 I drove was equipped with a 7-inch screen and the Mark Levinson Premium Surround System delivers strikingly life-like sound reproduction, with 835 watts powering 15 speakers. The final price, including the destination charge was $50,780.

The Lexus IS 350 F-Sport was one impressive vehicle. But it’s also one that can be overlooked as buyers continue to move away from sedans and into utility vehicles.