Both set to debut in autumn. 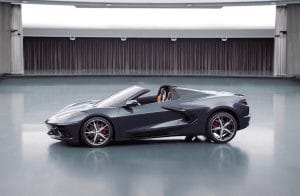 Never wish away the summer…unless you’re a Corvette fan, perhaps. In that case, expect to be doubly rewarded this autumn when two more versions of the all-new C8 Stingray are revealed, Chevrolet is promising.

The automaker released a short video Friday morning teasing both the upcoming Corvette Stingray Convertible and the C8.R race car. In terms of specifics, the only thing Chevy had to say was, “To Be Revealed Fall 2019.”

The automaker had acknowledged plans to launch the convertible during last week’s official debut of the eighth-generation ‘Vette, but this marks the first official confirmation of a next-gen race car. Still other variants of the C8, the first-ever mid-engine Corvette, are coming, TheDetroitBureau.com has verified, including some that will use a first-ever electrified drivetrain.

(This changes everything. Click Here for a full report on the 2020 Chevrolet Corvette Stingray.)

Chevy has been tinkering with the idea of a mid-engine version of the 2-seater for more than half a century, Zora Arkus-Duntov, “the father of the Corvette,” shown in the teaser video strapping himself in to test the 1960 CERV1 concept car, the first attempt to test that layout. 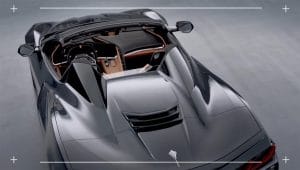 The one apparent sacrifice with the cabriolet is the loss of the clear engine cover panel.

Going mid-engine dramatically changes the proportions of the Corvette, of course. Though slightly longer, overall, the C8’s driver sits more than 16 inches closer to the abbreviated nose than in today’s front-engine C7 model. The new Stingray retains a number of classic Corvette cues, but also bears more of a resemblance to global supercar, such as a McLaren 760.

The new design, with its high flying buttresses, creates some challenges for those seeking to transform the Corvette coupe into a convertible. But the Chevy design team has clearly pulled it off. How remains a mystery, however.

From some loose lips at the bowtie brand we’ve been advised that the solution was to go with a folding hardtop system – one we’re expecting used aluminum or, perhaps, even carbon fiber panels to avoid adding too much weight up top. The rear angle image, seen here, shows cutlines on the back end of the Corvette where part of the upper body opens up like a clamshell to swallow up the roof panels. 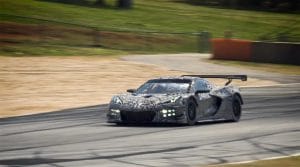 Few observers doubted Chevy would come up with a race version of the new Corvette C8.

Though the overall design preserves virtually every design detail of the coupe, there is one key difference: the cabriolet loses the clear engine cover that Chevrolet officials so proudly highlighted during a debut of the new Stingray.

Beyond the foldaway roof and lack of a glass engine cover, expect to see few other changes from coupe to convertible.

As for the C8.R, Chevy is simply confirming what was universally expected, the General Motors brand clearly not planning to pull the highly successful Corvette out of the motor sports world.

But despite confirming its return in C8 form, Chevy is telling us nothing about what the C8.R will deliver in track trim.

(The new Corvette C8 borrows an old name. When did Stingray first get used? Click Here to find out.) 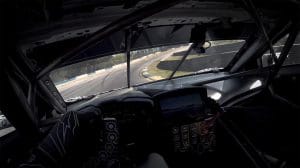 A driver’s view of the world from inside the C8.R prototype.

The current, C7.R model is powered by a 5.5-liter V-8 pumping out just under 500 horsepower. Whether it will increase the pony count is uncertain but could be limited by the rules of the various series in which it competes, including the LMGTE class for Le Mans, and the GTLM class for the IMSA WeatherTech SportsCar Championship.

Compared to the seventh-generation ‘Vette, that was an upgrade from the base Stingray. But even the “entry” version of the new C8 now pushes out about as much power as the outgoing race car – 495 horsepower and 470 pound-feet of torque from the upgraded LT2 6.2-liter dry-sump V-8.

Intriguingly, GM officials confirmed that the C8 was designed with electrification in mind and we likely will see variations roll out over the next few years that could include a mild hybrid, a plug-in hybrid, and an electrified all-wheel-drive system.

With more and more racing series, including Formula One, embracing hybridization, it would surprise no one if the C8.R eventually opts for some form of battery-based driveline, as well.

Of course, we’ll see some more variants of the street car, including next-gen versions of the Corvette Z06 and ZR1. Will any of those use electrification? Stay tuned.