Street and track versions under development. 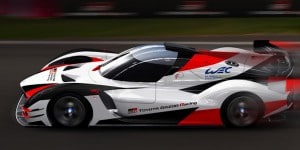 Toyota is in the midst of developing a hypercar for both the track and the road that will race in the 2020/2021 season.

Toyota is bound and determined to prove everything you thought you knew about the company is wrong, especially if that included words like “boring,” and “plain vanilla.” Fresh on the heels of its successful effort at the the 24 Hours of Le Mans, as well as its revival of the Supra model, the Japanese giant is giving us a hint of the hypercar it is developing for both track and street.

It’s not far away, either, with Toyota promising its most powerful model ever will be “on the grid” during the 2020/2021 World Endurance Championship series.

“Both road and race car are undergoing design and intensive development at the company’s technical centers in Toyota City, Higashi-Fuji and Cologne,” the automaker said in a release. It has also noted that president Akio Toyoda – the guy who keeps demanding more “passion” from the company – has himself spent some time test driving the as yet-unnamed hypercar.

Make that “hybrid” hypercar, the company said, a move that could also put a new spin on a technology Toyota has long been associated with – but  which doesn’t have a particularly sporty image in products like the Prius.

With its Gazoo Racing subsidiary at the helm, Toyota is no newcomer to the track, and it proved its mettle by winning this year’s Le Mans race. Focusing on the WEC’s endurance series might seem to make sense, as it plays into one of the more positive aspects of Toyota’s reputation: quality and reliability. 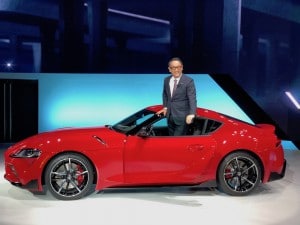 Akio Toyoda climbed inside the new Supra, celebrating its return after 17 years. He's pushing for more passion in Toyota's design.

It is participating in the 2019/2020 season with an LMP1-spec car. But the WEC is adding a new Hypercar class for the following year that will see the debut of the GR Super Sports model.

A video released over the weekend, during the Le Mans race, shows both the track version, as well as offering a hint of what the street model will look like. Beyond the obvious GR team livery, there appear to be a few key differences, including a hood scoop likely to be used in the WEC program. The track vehicle, a rendering shows, also has no rear window and a fin that rises out of the center decklid.

“For Toyota Gazoo Racing, this new era of competition is a fantastic opportunity to demonstrate our credentials not only as a race team against some of the best in the business but also as a sports car manufacturer,” Shigeki Tomoyama, Gazoo Racing Company president, said in the new announcement.

(Click Here for more on the Toyota Fine-Comfort fuel-cell concept.)

What we know about the new Hypercar class is that entrants will be allowed no more than 750 horsepower, more than plenty when you consider the track models will be limited to 1,100 kilograms, or about 2,425 pounds. The hybrid drive system, meanwhile, can contribute a maximum 270 hp. 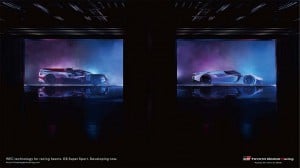 Toyota's new hypercar will have track and street versions ready for the 2020/21 season.

Gazoo is expected to rely on the hybrid powertrain package it already has, which combined a twin-turbo 2.4-liter V-6 with twin electric motors. Intriguingly, the IC engine punches out 493 hp, the electrified side of the package an equal amount. While that would have to be paired back for the track, a street version conceivably could use everything available with the all-wheel-drive system, meaning a full 986 hp under wide-open throttle.

Considering the number of new hypercars topping 1,000 hp, that would seem essential, though Toyota could gain a leg up on traditional competitors in the field like Ferrari, Porsche and Aston Martin by holding weight down as close as possible to the track car. Of course, the street version would clearly need to be modified to meet safety and emissions standards and offer at least some of the creature comforts a suitably rich buyer would expect.

(For more on the new GR sub-brand, Click Here.)

As for pricing, some sources suggest this could become the first Toyota model ever to carry a figure in the $1 million range.