Second half of 2019 expected to sputter.

New vehicle sales are expected to fall in June despite a strong economy.

Carmakers will finish the first half of 2019 with a dip in sales for June as retail sales sputter, analysts said this week.

Cox Automotive is forecasting June U.S. auto sales volume to decline nearly 2.7% from last year, or about 40,000 units, falling to 1.51 million. The seasonally adjusted annual rate (SAAR) is expected to drop slightly to 17.2 million, below May’s 17.3 million level, but on par with the 17.2 million posted in June 2018.

True Car Inc. and ALG project total new vehicle sales will slide to 1,487,407 units in June, down­ 0.6% from a year ago when adjusted for the same number of selling days. This month’s seasonally adjusted annualized rate for total light vehicle sales is an estimated 17 million units for the month and is expected to remain at 17 million SAAR for 2019.

Excluding fleet sales, ALG expects U.S. retail deliveries of new cars and light trucks to be 1,203,565 units, a decrease of 6.3% from a year ago.

Even the popularity of full-size trucks, sales are expected to fall in June.

For the second quarter of 2019, ALG expects new vehicle sales will reach 4,409,295 units, down 2%, from a year ago when adjusted for the same number of selling days.

“Increased incentive spending by several automakers in June in tandem with sustained strength in the underlying macro-economic indicators is helping drive resilient sales for both the month and quarter,” said Oliver Strauss, chief economist for ALG, a subsidiary of TrueCar.

“Given these factors, we are holding our initial forecast of 17 million SAAR for 2019 made in January,” Strauss said.

June is expected to return to a more modest market after surprisingly strong sales in May, Cox analysts said. Strong consumer confidence and employment gains continue to provide stable demand for light vehicles. 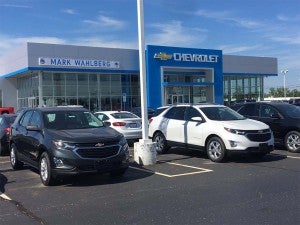 Sedans continue to be the sales laggard of the auto industry.

However, affordability issues weigh on the market, according to Charles Chesborough, Cox senior economist.

In total, Cox estimated vehicle sales in the first half of 2019 are forecast to be down 2.2%, with June sales expected to follow this downward trend for the balance of the year. On the other hand, fleet sales, both commercial and rental, have been the key to supporting the new-vehicle market in the first half and are expected to finish the January-to-June period up nearly 7%.

The decline in retail sales brought on by the tightening credit has been offset by the rise in fleet sales, which are aided by a change in depreciation rules. The depreciation changes in the tax laws allows commercial customers to write off the cost of a new vehicle in one year.