Mercedes-AMG Unveils Most Powerful 4 Cylinder Ever 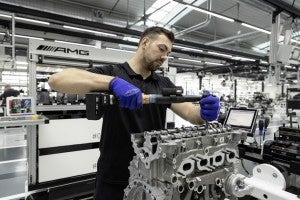 The days of anemic four-cylinder engines passed long ago, and most of us have had a chance to push a peppy four banger to its limits with a fair bit of enjoyment.

However, in recent years, the horsepower numbers have been creeping up to unprecedented levels surpassing 300 hp. Mercedes-Benz and its performance partner, AMG, have now taken it to a new level with its 2.0-liter turbocharged four cylinder that puts out 416 hp.

In addition to the additional ponies, the way that power is delivered is different. The typical turbo lag that came with its predecessor is toned down significantly. The M139 is designed to deliver the free-revving feel of a naturally aspirated engine.

“We already set the benchmark in the segment with the preceding engine. This fundamentally new four-cylinder presented us with the challenge of doing even better,” said. Tobias Moers, Chairman of Mercedes-AMG GmbH.

“And we succeeded with a number of sometimes revolutionary solutions. With the M 139, we have once again impressively demonstrated the engine expertise of Mercedes-AMG. Not only is the output per liter unrivalled for a turbocharged engine, the high level of efficiency also demonstrates that the internal combustion engine still has further potential.”

The new engine is entirely assembled by hand. On the first floor of the AMG engine manufactory in Affalterbach, a completely newly designed production line was installed in which Mercedes-AMG has brought the “One Man, One Engine” principle to a new level, together with Industry 4.0 methods that incorporate the latest findings in ergonomics, materials handling, quality assurance, sustainability and efficiency.

On the road to implementing Industry 4.0, AMG’s hand assembly operation likewise follows the vision of “smart production”. This excels with maximum flexibility, and is transparent and highly efficient. It safeguards and improves the quality of the engines and production processes using innovative and digital technologies.

(Mercedes-Maybach is coming back. Click Here for the story.)