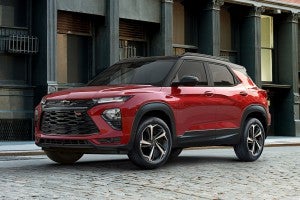 General Motors is ignoring pressure from President Donald Trump to build more vehicles in the U.S, building its new small SUV in Korea.

General Motors Co. is resurrecting an old name for a new sport-utility vehicle built in South Korea for sale in the United States. The Trailblazer returns as a small ute starting in 2020.

“We consider several factors when selecting where to manufacture vehicles,” a GM spokeswoman noted in an email. “There were efficiencies to use the existing production facility in Korea. At this time, we can confirm these markets for Trailblazer: U.S., Canada and Korea.”

The decision suggests GM’s management has decided to continue down the path of globalization despite the hectoring by President Donald Trump to bring manufacturing jobs back to the U.S.

Trump’s trade war with China, where GM has a major stake, remains unresolved and positions on both sides of Pacific were showing signs of hardening. Trump has vowed to use tariffs to force major U.S. trading partners to revise trade practices and force more companies to bring manufacturing jobs back to the U.S.

(GM, Michelin team up to let air out of the tire. Click Here for the story.)

In addition, Trump is threatening to impose new tariffs on Mexico, one of this country’s largest trading partners and a major center of production for the global auto industry. GM has been one of the largest corporate investors in Mexico since the 1970s even before the coming of NAFTA, which Trump has described as the “worst trade deal ever.” 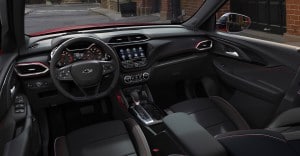 The South Korean-built Trailblazer joins the Chevrolet portfolio in early 2020, and with this new entry Chevrolet offers customers one of the broadest line-ups of crossovers and SUVs in the industry. Positioned between the Trax and Equinox, the 2021 Chevrolet Trailblazer will join the fast-growing, small SUV segment, GM officials said.

“The Trailblazer’s great design enables more personalization,” said Steve Majoros, director of Chevrolet passenger car and crossover marketing. “Trailblazer is a continuation of the design language for Chevy’s crossover family and extends our momentum into one of the industry’s fastest-growing segments.”

Product specifications and pricing will be shared later. The new Trailblazer is expected to start arriving at dealers in early 2020.

The Chevrolet Trailblazer will include an RS trim with standard two-tone roof that allows drivers to purchase a vehicle that reflects their lifestyle.

(GM wants to be part of the solution for climate change. Click Here for the story.)

“These features deliver added confidence and peace of mind behind the wheel, helping drivers monitor the vehicle’s surroundings and the driving environment with an available combination of camera, short-range radars and ultrasonic sensors,” said Majoros.