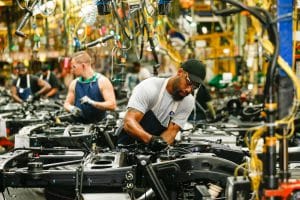 General Motors employees work on the assembly line at the GM Arlington Assembly Plant, where GM is investing $20 million.

General Motors continues to invest heavily in its full-size trucks and sport-utility vehicles, announcing plans Tuesday to spend $20 million on upgrades at its plant in Arlington, Texas, to facilitate the launch of its new family of full-size SUVs.

The plant, which employs more than 4,500, builds Chevrolet Suburbans, GMC Yukons and Cadillac Escalades. The move comes as part of a string of investments GM has made in other truck-producing plants.

In Arlington, GM has invested more than $1.4 billion since 2015 to build a new paint shop and for body shop and general assembly area upgrades. The new upgrades at Arlington are scheduled to be completed next year, officials noted.

“We’ve been building trucks in Texas for more than 20 years, and our additional investment in Arlington Assembly is proof of our commitment and confidence in our Arlington team,” said Gerald Johnson, GM executive vice president of Global Manufacturing. 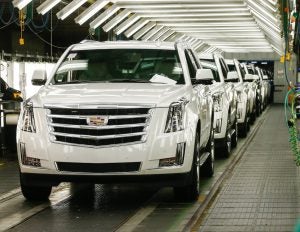 Cadillac Escalade vehicles roll off the assembly line at Arlington Assembly. GM is upgrading the plant for the launch of its all-new full-size SUVs.

(GM rams $150 million into Flint plant to up HD truck production. Click Here for the story.)

“We are counting on the Arlington team to continue focusing on building the highest quality products possible for our customers while preparations continue for the launch of the next generation of our full-size SUVs.”

Large trucks and SUVs have helped GM post profits the past few years. They’ve been especially critical to the company’s bottom line this year as the U.S. market has seen sales slump 1.8% through May.

Last year, GM delivered more than 282,000 full-size SUVs in the U.S. That is almost four vehicles for each one delivered by the company’s closest competitor, Ford Motor Co. GM’s full-size SUVs are also exported to many markets around the globe. 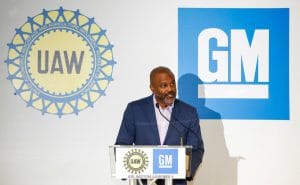 GM has invested more than $4.2 billion in three U.S. assembly plants – Arlington, Flint, Michigan and Fort Wayne, Indiana – to prepare for the launches of its next generation pickups and SUVs and to increase capacity, further improve build quality and drive operating efficiencies.

The company’s new trucks and SUVs are also driving new investments at plants in Moraine, Ohio to expand diesel engine production, Toledo, Ohio to expand 10-speed transmission production and more. Further, GM is pondering a $1 billion investment in its plant in Wentzville, Missouri, which produces midsize trucks and full-size vans.

Investing heavily only confirms GM’s focus trucks and utility vehicles and away from coupes and sedans. While not quite as extreme as Ford’s plans to eliminate all cars except the Mustang from its line-up, it is substantially cutting cars from its portfolio.

In the meantime, its these vehicles keeping the company in the green. During the first quarter saw motorists in the U.S. pay more than ever before for GM vehicles, a surge largely credited to higher prices for the recently redesigned Chevrolet Silverado and GMC Sierra full-size pickups. Those models generated an average price of about $5,800, or 20%, more than the trucks they replaced.