Once known for bargain-basement pricing and mediocre quality, Korean carmakers have not only moved up-market but shown that they can deliver industry-leading quality, or so it seems, based on the latest annual J.D. Power Initial Quality Study.

If anything, Kia, Hyundai and recently launched luxury brand Genesis are actually expanding their lead over the Japanese and European marques that had traditionally led the closely followed Power IQS. Genesis topped the 2019 chart, followed by Kia and Hyundai, followed by Detroit-based Ford and Lincoln. Japan managed to place only three brands in the IQS top 10, while not a single European brand scored above average.

But the new study – which focuses on new cars, trucks and crossovers during their first 90 days on the road – also revealed that the quality of the latest models leveled off after scoring significant improvements through much of the past decade, according to Power.

“Automakers continue to make progress in areas like infotainment that attract a lot of consumer attention,” said Dave Sargent, the head of automotive research for J.D. Power. “However, some traditional problems crept up this year including paint imperfections, brake and suspension noises, engines not starting and the ‘check engine’ light coming on early in the ownership experience.” 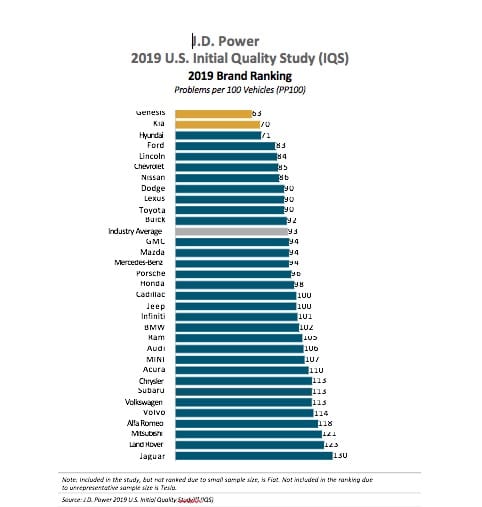 The return of mechanical issues comes as a surprise, as automakers had largely banished problems with engines, transmissions and other components, as well as complaints about paint, fit-and-finish and noise.

The study also revealed another troubling development, Sargent noting that “more people are having issues with their advanced driver assistance systems, which are critical for building consumer trust in future automated vehicles.”

ADAS systems, such as forward collision warning, automatic emergency braking, lane departure warning and blind-spot detection, are becoming more and more common. Toyota’s Lexus brand on Wednesday announced it will make a suite of some of these features standard on all 2020 models, with other manufacturers taking similar steps. But industry observers have reported consumer concerns about the way these technologies operate. In some cases, that’s due to a lack of familiarity, but malfunctions have been a problem, as well.

Power’s IQS has developed an outsized following as an arbiter of industry quality. It focuses solely on how vehicles perform during the first few months out of the showroom. While a separate study follows long-term reliability, the IQS is considered a good indicator of how manufacturers are addressing quality issues. The study measures the number of complaints owners have for every 100 vehicles, reports as problems per 100, or PP100. 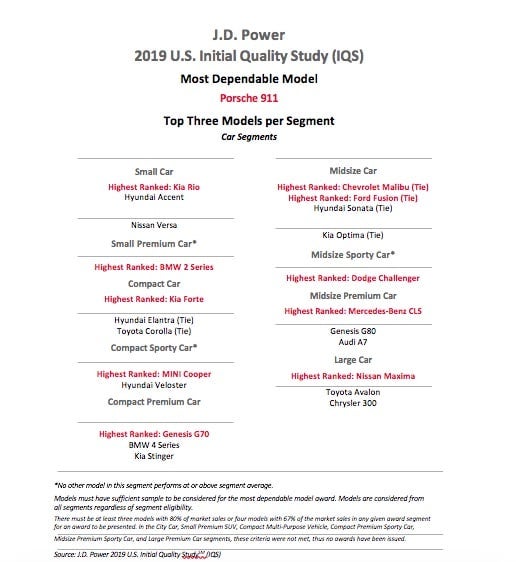 For decades, Japanese brands like Toyota, Nissan and Honda led the IQS, but their grip has been broken in recent years. This time around, the three Koreans topped the chart. Genesis had an average of just 63 PP100, Kia 70 and Hyundai 71. Ford and Lincoln followed with 83 and 84 PP100, respectively.

Another Detroit brand, Chevrolet, came in sixth with 85 problems, while Nissan, the highest-ranked Japanese marque, had 86. Dodge, a brand not typically associated with high quality, followed in eighth, with 90 PP100, narrowly edging out Lexus and Toyota which fell behind by mere fractions of a point. Lexus and Toyota had long been the IQS darlings, but still manage to score at or near the top in other Power studies looking at longer-term reliability.

All told, Detroit managed to place five of its brands above the industry average of 93 problems per 100, while all of the European brands fell below that cut-off. The highest-ranked of the continental brands was Mercedes-Benz, with a score of 94.

That said, Porsche managed to field the highest-quality individual product covered by this year’s IQS, owners of the iconic 911 sports car reporting just 58 problems for every 100 vehicles. 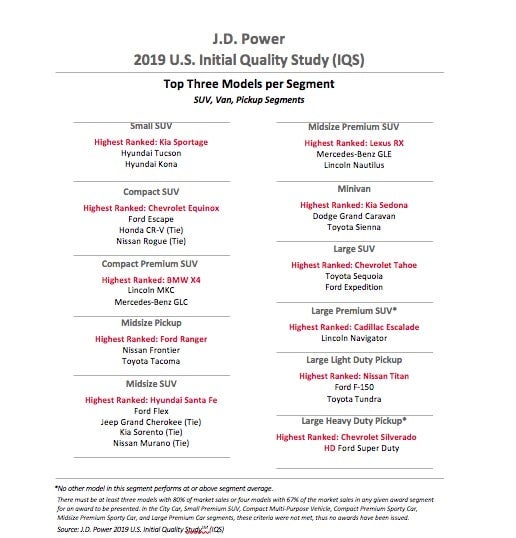 The Hyundai Motor Group, which includes Genesis and Kia, as well as Hyundai, had six individual segment winners, more than any other manufacturer. That included the Genesis G70; Hyundai Santa Fe; Kia Forte; Kia Rio; Kia Sedona; and Kia Sportage.

This isn’t the first time that the IQS has revealed a slowdown, or even a reversal in overall industry improvements in quality. But the issues have typically involved high-tech features. Ford took a sharp tumble in the quality study after introducing its original Sync infotainment system which consumers complained was balky and difficult to operate. It has largely addressed that with its latest update, Sync 3, while also resolving some transmission problems.

(To see more about the Power study finding a “total lack of trust” in autonomous tech, Click Here.)

Manufacturers will be under pressure to get quality efforts back on track but face challenges as they introduce not only new, digital ADAS systems but also the more advanced engines and transmissions needed to meet increasingly stringent emissions and mileage standards, Power officials have told TheDetroitBureau.com.