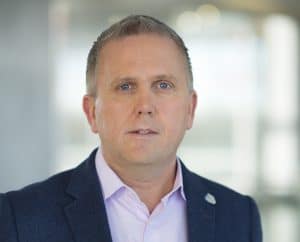 Ford of Europe President Stuart Rowley outlined new plans for the company’s operations on the continent.

Just a month after announcing plans to eliminate 7,000 white-collar jobs – a third of them in the U.S. – Ford Motor Co. said Thursday that it will trim nearly a quarter of its European workforce while selling or closing six of 24 plants on the continent.

The move marks the latest step in an ongoing global reorganization aimed at addressing weakening earnings, especially in troubled markets like Europe, Latin America and China. But it also comes as Ford rethinks its underlying business model, shifting from passenger cars to light trucks, and from gas- and diesel-powered vehicles to those running on batteries.

“Ford will be a more targeted business in Europe, consistent with the company’s global redesign, generating higher returns through our focus on customer needs and a lean structure,” Stuart Rowley, president of Ford of Europe, said in a statement. 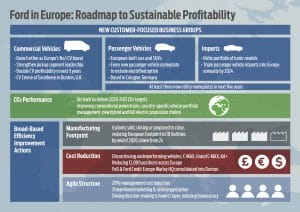 All told, Ford will eliminate 12,000 jobs in Europe out of a workforce of 51,000, including both salaried and hourly employees. It also plans to sell or close a quarter of its European factories, including an engine plant in Wales, a transmission factory in France and three facilities in Russia. And it will cut production and drop shifts at assembly plants in Germany and Spain.

It also plans to reorganize its European operations into three distinct groups focusing on passenger vehicles, imports and commercial vehicles. Last January, Ford announced a joint venture with Volkswagen focused on commercial vehicles and that latter group will be directly involved in that new alliance.

Ford has been in the midst of making major changes since undergoing a management shake-up in May 2017 that saw Jim Hackett, the former Steelcase CEO, named its chief executive officer. 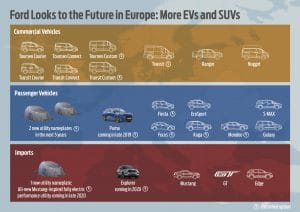 Job cuts have been one part of the reorganization. Just last month, Ford said it would eliminate 7,000 white-collar jobs, including 2,300 in the United States. At that time, CEO Hackett hinted there would likely be more to follow, noting, It had previously announced some cuts in Europe, as well.

Whether there will be more to come remains to be seen, but cost-cutting is critical, according to a new report by the Detroit-based consultancy, AlixPartners. With sales in the U.S., Latin America and China in a slump and European demand stagnant, at best, the auto industry is facing a “profit desert,” warned Mark Wakefield, head of the firm’s automotive practice, and must take steps to address that.

But Ford is not relying solely on job cuts, said Joe Hinrichs, president of the company’s automotive operations, in an interview this past spring. Among other things, it is trying to create a “flatter,” more responsive organization, he said, one with fewer corporate silos and able to more rapidly respond to a fast-changing automotive environment. Among other things, it has taken steps to remove several layers of management since Hackett’s appointment. 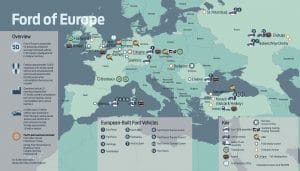 Another key change has been the shift away from sedans and coupes to SUVs, CUVs and other light trucks. In the U.S., the Mustang will be the only passenger car remaining by next year, and similar moves are taking place in other markets, though not to quite the same extent.

Then there’s the shift to battery-powered vehicles, starting with the launch later this year of what Ford has called a “Mustang-influenced” crossover, its first long-range battery-electric vehicle, or BEV. Ford has committed to spend $11 billion on electrification and expects to have 40 battery-based models in its global line-up by 2023, including BEVs, plug-ins and conventional hybrids.

“Our future is rooted in electrification,” said Rowley. “We are electrifying across our portfolio, providing all of our customers with more accessible vehicle options that are fun to drive, have improved fuel economy and are better for our environment.”

The industry is expected to invest $225 billion on electrification between now and 2023, according to the AlixPartners study. That is straining budgets – especially at a time when the industry is ramping up spending on autonomous vehicles, as well – with that expected to require a collective investment of $85 billion annually by 2025.

That has led a number of erstwhile competitors to team up – Jaguar Land Rover and BMW early this month announcing they would partner on EV development efforts. Ford and VW are negotiating similar agreements covering both autonomous and electrified vehicles, and could announce those deals in a matter of weeks, according to inside company sources.