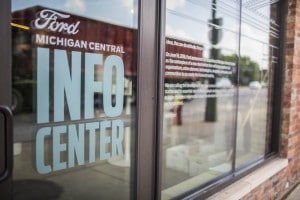 Ford is opening a new information center at the Factory at Corktown to facilitate engagement with the community.

Ford Motor Co. celebrated the one-year anniversary of the acquisition of Michigan Central Station in Detroit by opening an information center at The Factory at Corktown, a few blocks from the station.

“We’ve learned a lot from local residents and businesses over the past year as we further our plans for the development of Michigan Central Station,” said Mary Culler, Detroit development director for Ford Motor Co., as the automaker works with the community and other stakeholders to create a destination that will help shape the future of transportation while strengthening Detroit’s position as the Motor City.

“Our new information center will provide an ongoing opportunity to share our plans, celebrate the culture of the area and continue learning from the community. In this historic neighborhood, we’re building a place where people can solve real-world challenges and create future opportunities together,” added Culler, noting Ford is also hoping to encourage new residential development in Corktown.

Paula Carethers, an urban planner employed by Ford on the project, told thedetroitbureau.com that Ford should have a plan for the area around the train station. Ford also has acquired a century-old building designed by Albert Kahn that had been used as book depository but was abandoned after a devastating fire and expects to restore the building. 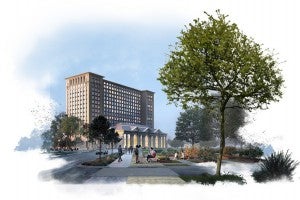 Requests for proposal for the redevelopment of the Kahn building are going out soon, Carethers said.

A third building, an old foundry, is being demolished after Ford’s experts concluded it could not be rehabilitated. A fourth building on the emerging Ford Campus, The Factory, has been rehabilitated and now serves as the home for Ford’s autonomous vehicle group and for team from AV partner, Pittsburgh-based Argo AI.

Argo AI started on-road testing of a Ford Fusion Hybrid self-driving vehicle in Detroit earlier this month. Similar vehicles are already deployed in Pittsburgh, Palo Alto, California, Miami and Washington, D.C. in an effort to learn more about how autonomous technology can be used in various urban environments.

(Click Here for more about Ford charging ahead with its new autonomous vehicle unit.)

Ultimately, new development, with the iconic train station at its center, plans to bring together thousands of innovators, entrepreneurs, companies, designers, technologists and Ford employees to design and test new solutions for how people and goods move now and in the future – connecting them with an increasingly smart world, the automaker believes. 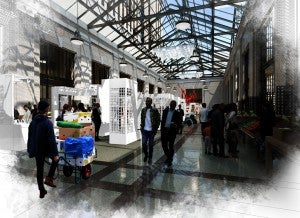 Ford sees opportunity for community groups and local businesses to be a thriving part of the Market Hall experience in Michigan Central Station.

In addition, to honor the artists who have made this area their home, Ford will use the information center as a canvas to display new work. The windows will become a revolving gallery – adding arts, culture and history to Michigan Avenue – by offering local artists the opportunity to showcase their work throughout the year.

The new information center is located in The Factory at 1907 Michigan Ave., the space will provide the public with access to project information, construction updates, mobility pilot programs and technologies, as well as community initiatives. It will be open to the public 4-7 p.m. Wednesday, Thursday and Friday and noon-4 p.m. Saturday. Beginning the week of June 24, the center will be open 4-7 p.m. Tuesdays and Thursdays and noon-4 p.m. on Saturdays.

(What’s going on at “The Factory”? Click Here for more on Ford’s other project.)

“For more than a century, Ford and Detroit have worked together to turn local ideas, inspiration and hard work into programs that improve people’s lives,” said Culler. “We look forward to our continued partnership with the community and others as we develop Michigan Central Station into a place that inspires innovation and creativity.”