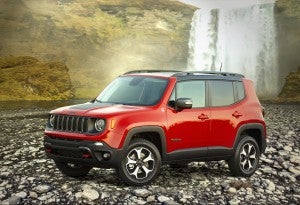 Jeep will produce a battery-electric version of the Renegade that will be available in Europe.

For an automaker with seemingly no battery-electric car program to speak of, Fiat Chrysler suddenly has collected a bunch of assets needed to jump into the EV market with both feet. The automaker signed an agreement with European utilities Enel and Engie to offer charging points for its coming battery-electric products.

FCA would have been much farther along in the EV race if a proposed merger with Renault had gone through; however, the company isn’t letting that be much more than a hiccup on its sudden progress in the segment.

Last June the company announced plans to invest 9 billion euros, or about $10 billion, during the next five years to introduce hybrid and electric cars in all of its markets. Currently, it offers a plug-in hybrid version of its popular Chrysler Pacifica minivan in North America.

However, there are more vehicles coming in Europe, including the soon-to-be-launched fully electric Fiat 500 BEV and plug-in hybrid Jeep Renegade PHEV. FCA said the partnerships with Enel and Engie will allow the automaker to offer private and public charging stations to support those vehicles. 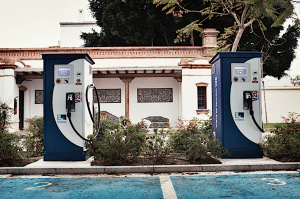 Enel X is teaming with Engie to provide charging services for Fiat Chrysler in Europe.

“We are assembling an eco-system of partners, products and services across multiple markets to meet and exceed the rapidly evolving expectations of our customers for electrified vehicles,” FCA Chief Executive Mike Manley said.

The deal also includes developing services such as apps to allow clients to locate public charging points. Enel, through its Enel X unit, will work with FCA in Italy, Spain and Portugal, while Engie will work with the carmaker in 14 other European markets.

Enel X will provide intelligent charging solutions to FCA’s plants, offices and R&D centers, with 700 stations due to be installed in Italy over the next two years, as well as to FCA’s dealerships in Italy, Spain and Portugal, including customer parking, test-drive and service areas.

(Click Here for more about the failed FCA-Renault merger.)

To strengthen their partnership and accelerate innovation in e-mobility, Enel X and FCA will launch an innovative charging program by establishing an innovation committee aimed at jointly designing, experimenting and testing new services and product upgrades for the different markets of reference, leveraging on the charging assets installed at FCA premises managed through the Enel X e-mobility management platform.

Earlier this year, Manley outlined plans to add new EVs and hybrids to the Jeep line-up. Other FCA brands, including Alfa Romeo, will also be electrified in the near future.

The announcement provided some needed clarity about FCA’s electrification plans. Manley revealed Fiat Chrysler will design future products to use a broad range of powertrains, from gas and diesel engines to mild, “conventional” and plug-in hybrids, as well as pure battery-electric drivetrains.

“Basically, every (future) Jeep they build will have a plug-in hybrid option,” said Sam Abuelsamid, a senior analyst with research firm Navigant, “and they’re designing them to accommodate full electric, as well.”