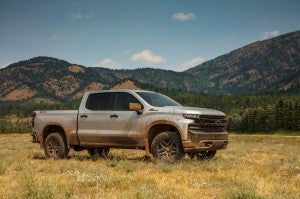 GM imports more vehicles from Mexico than any other automakers, including the Chevy Silverado.

It’s a bear market, at least when it comes to automotive stocks, with Pres. Donald Trump’s planned tariffs on Mexican imports set to go into effect a week from today.

Last Friday, the president tweeted that he was prepared to enact a new 5% tariff on Mexican goods in an effort to pressure that country to stem illegal immigration across the southern border. Barring any resolution, Trump said that would continue to climb to 25% by October 1.

Nearly a dozen manufacturers would quickly be forced to either raise prices on vehicles imported from Mexico and risk weakening sales, or absorb the tariffs and take a hit to their bottom lines. But even vehicles produced in the U.S. would face tariffs on imported parts and components, such as engines, wiring harnesses and body and interior trim, according to industry analysts.

That “could cripple the industry and cause major uncertainty,” Deutsche Bank auto analyst Emmanuel Rosner wrote in a report to investors.

(For more on the impact of the Mexican tariffs, Click Here.) 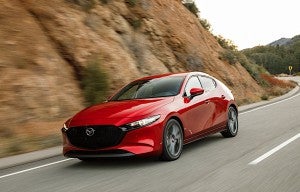 Mazda builds the Mazda3 at a new Mexican plant. Its shares tumbled to a six-year low.

The tariffs would come at a particularly bad time considering new car sales have tumbled about 3% this year, 2019 expected to bring only the second downturn in demand since the industry began recovering from the Great Recession in 2011.

Among the manufacturers currently shipping vehicles from Mexico to the U.S., General Motors is the most exposed to the new tariffs, the largest of the domestic carmakers last year shipping 666,765 vehicles across the border, according to data from Mexico’s Instituto Nacional de Estadistica v Geografia, or INEGI. The carmaker builds six different nameplates in three different Mexican assembly plants, including the popular Chevrolet Silverado pickup. It also imports Mexican-made parts for use on U.S. assembly lines.

GM shares tumbled sharply following news of the new tariffs. The stock closed Thursday at $34.82 a share, but finished the week at $33.34.

But GM wasn’t the only one hit by the tariff announcement. Its cross-town rivals Ford and Fiat Chrysler were also hit hard. So were European imports like BMW and Volkswagen. The latter manufacturer operates a network of plants in the Puebla region that produce both VW and Audi-branded products, a combined total of 282,745 vehicles coming to the U.S. last year, INEGI data showed. The Audi plant near Puebla, less than two years old, now serves as the only source of the German marque’s popular Q5 SUV. 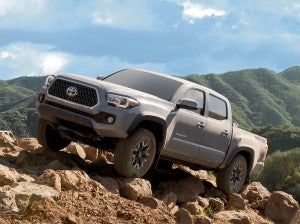 Investors are worrying that Japan could be the next to face new tariffs. Toyota imports the Tacoma, the #1 midsize pickup, from Mexico.

The three largest Japanese manufacturers all rely on Mexican plants. Among them, Nissan is most vulnerable, its three plants boasting a combined capacity of 850,000 vehicles annually – compared to 263,000 for Honda and 200,000 for Toyota.

Last year, Nissan shipped 373,515 of those vehicles, including models such as the Sentra, to the U.S. where they accounted for about a third of its sales. Almost 90% of Toyota’s Mexican production – 179,688 vehicles in all – were destined for American dealers last year, including its Tacoma, the most popular offering in the midsize pickup segment. And roughly 40% of Honda’s Mexican output, or 107,989 vehicles, were shipped to the States. Those included Fit hatchbacks and HR-V crossovers.

Mazda also relies on its Mexican plant to produce the little Mazda3 for North American markets. Its shares on Friday hit their lowest level since 2013.

The sharp tumble in Japanese auto stocks appears to reflect not only the threat of Mexican tariffs but the possibility that Trump will enact new trade barriers against Japan when he finally decided how to respond to a U.S. Commerce Dept. study that found import automobiles and auto parts a threat to national security.

“The odds that Trump will target Japan next have clearly risen” in the minds of investors, Olivier d’Assier, APAC Head of Applied Research at Axioma, told the Bloomberg news service.

But the president could just as easily turn his attention next to Europe, trade negotiations showing little signs of progress over the last few weeks since Trump decided to delay action on the Commerce Dept. study for as much as six months.

For now, Mexico has taken steps to begin discussing the immigration issue. It is far from certain whether that will be enough to have the White House delay enacting the new tariffs. In all, about $99.3 billion worth of Mexican-made automotive exports could be hit, including $93 billion in fully assembled vehicles. A Mexican-made Silverado carrying a $40,000 sticker price at a U.S. showroom would likely see an extra $1,500 in duties, according to analyst Joe Phillippi, reflecting an FOB price of around $30,000 as it rolls out of the plant. That would jump to $7,500 by October.

Some Mexican models, such as a well-equipped Audi Q5, could be hit with tariffs of more than $10,000 by October, if the full, 25% duties were to go into effect.

The auto industry, said Phillippi, “would get hammered.” And at a time when new vehicles are already losing market momentum, the concern is that the minor slowdown could turn what he called “a rout.”

“The tariffs will be a problem for us and everyone else in the industry,” said Henio Arcangeli, the head of sales for the American operations at Honda.

(Trump’s “national security” tariffs could be blocked by WTO. Click Here for more.)