Apple Saves Drive.ai Days Before it Would Shut Down

Tech giant may simply drain the start-ups talent for its own autonomous program. 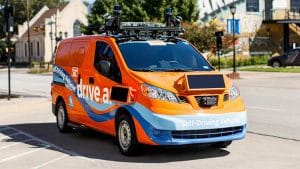 The once-promising autonomous vehicle start-up Drive.ai has found itself a white knight, just days before it was set to shut down, and it signals that tech giant Apple remains serious about entering the self-driving car market.

It had been rumored for weeks that Apple was in talks with Drive.ai, which once was valued as high as $200 million, though a price tag for the takeover has not been announced. A number of reports began circulating that the proposed deal had fallen through, but Apple confirmed the acquisition late Tuesday.

What precisely Apple has in mind for its new subsidiary is uncertain, though the Reuters news service suggests the deal may have been an “acqui-hire,” an acquisition meant primarily to get Drive.ai’s engineering team.

(Americans warming to the idea of autonomous vehicles. Click Here for more.)

Apple has been the subject of years of speculation about its interest in the auto industry, especially since Tim Cook finally confirmed it was exploring the field. But what it has in mind remains far from certain. This past January, TheDetroitBureau.com reported, Apple cut hundreds of jobs in what was known internally as Project Titan.

The cutbacks appeared focused on the side of the project working on an actual vehicle. It appears the tech company has continued to focus on autonomous driving, potentially setting itself up as a competitor to Waymo, the Google spin-off that recently launched a self-driving ride-sharing service, Waymo One, in the Phoenix area. 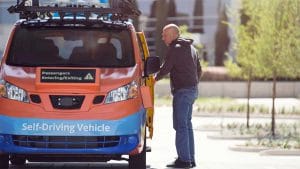 Drive.ai had planned to give rides to 10,000 passengers under the pilot program.

That would make Drive.ai a comfortable fit, whether solely for its engineering team or its intellectual property.

(For more on the cutbacks at Apple’s Project Titan, Click Here.)

Based in Mountain View, California, just minutes away from Apple’s headquarters, Drive.ai was founded by a team of machine learning specialists from Stanford University. It quickly built a reputation for its technology which was good enough to allow the start-up to operate an autonomous ride-sharing service in Texas using modified versions of the Nissan NV200 commercial van.

When it launched that six-month pilot project in Arlington, a suburb of Dallas, last autumn, it said it planned to let 10,000 people ride in vehicles capable of operating at Level 4 autonomy. Under industry guidelines, Level 4 vehicles are capable of operating without a driver or backup “operator.” But they must be “geo-fenced, meaning they can only run on select roads and under ideal weather conditions.

Each vehicle carried the Drive.ai colors and logo, and also were equipped with four screens that could communicate with other vehicles, pedestrians and bicyclists, letting them know what the self-driving vehicles was about to do. That has been considered a critical challenge for autonomous vehicles since they’ll eventually have no driver onboard to signal with facial expressions or hand gestures.

(Industry spending on autonomous vehicles likely to hit $85b annually. Click Here for more on that report.)

But despite the apparent sophistication of Drive.ai’s technology, and the funding it received early on, the company has been burning through cash at a rapid pace and, the San Francisco Chronicle recently reported, it had given notice to the State of California that it was planning to lay off its 90 employees. The company was expected to shut down by the end of this week.

There have been scores of companies set up in recent years to focus on autonomous driving, though a number of them have already closed down or have merged or sold their operations. A handful appear to be faring well, including Waymo and Argo, which has received major investments from Ford, among others; and Aurora, which has announced investments by Fiat Chrysler and the Hyundai Motor Group in recent weeks.