VW Tennessee Workers Get Another Chance for Unionization

The UAW's third election in five years at VW's Chattanooga plant will take place in mid-June.

The UAW is getting its another kick at the can when Volkswagen of America hourly workers in Tennessee will vote yet again to decide if they want to be represented by the Detroit-based union.

Workers at the Chattanooga, Tennessee assembly plant will vote June 12, 13 and 14 to unionize.

The UAW petitioned the National Labor Relations Board last month to set the dates for the election to represent about 1,700 trade and production workers at the plant that builds cars and sport-utility vehicles. The new dates come after the automaker’s lawyers won a temporary delay.

In a contentious environment, hourly workers at the plant in 2014 narrowly voted against UAW representation. The union and some others complained bitterly that the state’s Republican leadership and the automaker worked to deter workers from voting in favor of representation — charges all deny. 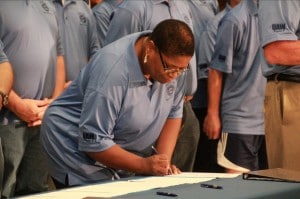 Volkswagen hired lawyers to delay the UAW's third vote in Chattanooga. The delay has been lifted with the vote coming in two weeks.

The UAW was hoping to leverage a victory in Chattanooga to wins at other foreign automakers in the southeastern U.S. Instead, the UAW was dealt blows at plants in Alabama and Mississippi. The union did gain some measure of respect by securing the 300 maintenance workers at VW’s Tennessee plant in 2016.

However, Volkswagen’s American lawyers, recruited from the ranks of anti-union law firms, did persuade the NLRB to postpone a vote indefinitely, frustrating the UAW.

Two Republican members of the NLRB, appointed by President Donald Trump, known for the their anti-union opinions, outvoted the lone Democrat on the board two to one to postpone the election, pending a final decision in a case involving the maintenance workers now represented by the union.

VW’s lawyers argued that the UAW can only represent either all or none of the workers in Chattanooga rather than a so-called splinter union within a largely non-union workforce. However, settled precedent allowed so called splinter units to exist if the employees want representation, according to the UAW.

Materials obtained by Labor Notes, a union publication, indicate VW has engaged in what is described as a “scorched earth” anti-union tactics that are commonly deployed by U.S. employers, marking a sharp shift from the company’s claims of “neutrality” towards unions.

The UAW faced similar opposition during the 2017 election at Nissan in Canton, Mississippi. Both Nissan and Volkswagen have relied on the services of notorious union-busting law firm Littler Mendelson. One of Trump’s two appointees to the Labor Board, William Emanuel, was a partner at the firm, though he did not rule on the Volkswagen case, Labor Notes reported.