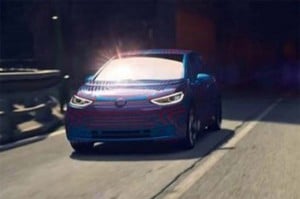 Just days after Volkswagen revealed its accepting pre-orders for its new ID.3 battery electric hatchback, the automaker claims it has more than 10,000 pre-orders for the new EV. VW sales chief Jurgen Stackman revealed the news in a tweet.

The company started taking deposits of 1,000 euros on Wednesday for the all-new battery-electric entry. It got its name for being the third variant in VW’s ID. line-up of electric vehicles.

The new battery electric hatchback will cost about $33,500, and European deliveries will begin midyear 2020. Volkswagen will officially unveil the new Golf-sized EV at the Frankfurt Motor Show in September. At that time, pre-orders will be confirmed as orders.

Stackman recently suggested he expected this kind of result.

“I think it not improbable that the launch edition will already have sold out before the ID. is unveiled at the Frankfurt Motor Show; the numbers being reported by our dealers indicate that,” he said.

The results are impressive, but not the best-ever response to a new EV going on sale. That honor would go to Tesla, when it started accepting orders for the Model 3 in 2017. It was accepting 1,000 deposits and, according to the company, had more than 400,000 orders for the sedan.

The California-based EV maker just took the covers off its new Model Y small SUV, which is due to arrive in late 2020.

VW plans to sell three versions of the ID.3: 45kWh, 58kWh and 77kWh. They will have ranges of 200 miles, 261 miles and 342 miles, respectively. The company noted a full warranty on the ID.3’s battery will cover eight years and about 100,000 miles or the normal depreciation of the battery to 70% of its original maximum capacity.

VW has been working on an even faster, 350 kW, 800-volt system that would allow even the largest battery pack to hit 80% in about 10 minutes, but that technology is first being rolled out by the Porsche brand with the debut of the Taycan model. It’s unclear if and when it would be available for Volkswagen models.

VW has announced plans to invest billions of euros in its electrification program, with more than 40 all-electric models in development and due out by around mid-decade.