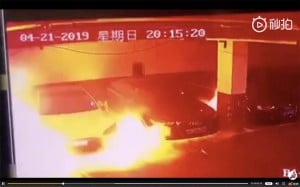 A security camera caught images of a Tesla spontaneously catching fire in a Hong Kong garage.

Responding to the latest in a series of fires involving its electric vehicles’ battery packs, Tesla will updated its digital control software.

The move comes in the wake of a pair of fires in China, a critical market for the manufacturer, both involving parked vehicles. Since the original Tesla Model S was introduced, the company’s products have been involved in more than a dozen vehicle fires.

“As we continue our investigation of the root cause, out of an abundance of caution, we are revising charge and thermal management settings on Model S and Model X vehicles via an over-the-air software update that will begin rolling out today, to help further protect the battery and improve battery longevity.” Tesla said in a statement released on Wednesday.

The automaker has taken other steps over the years to reduce the risk of fires. After several early Model S sedans caught fire, for example, it revised the structure of its battery packs, which are mounted underneath the vehicle, in a skateboard-like platform. New titanium shielding was added to reduce the risk of a pack being damaged by road debris, something blamed for several of those blazes. 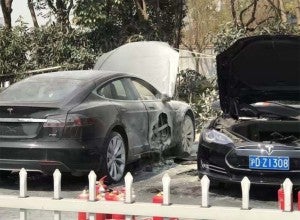 Most of the incidents involving Tesla battery fires occurred after one of its vehicles was involved in a crash. Tesla, however, isn’t the only automaker that has experienced problems with fires. Chinese start-up NIO confirmed last month that one of its vehicles while it was in a repair shop. Fires have been reported with Chevrolet Volts, Fisker Karmas, Mitsubishi iMiEVs and other electric vehicles.

And there have been numerous incidents of consumer devices, such as cellphones and laptop computers, unexpectedly igniting. That has led most major airlines to take steps to protect aircraft from the possibility of fires involving lithium-ion batteries. Travelers now routinely hear agents advise them to remove batteries from luggage that they plan to gate check, and air freight shipments of batteries have been sharply restricted.

It’s not clear precisely what the new Tesla software update will do, but it appears to be aimed at babying the lithium-ion cells in its battery packs. The chemistry is quite sensitive to temperature variations, especially excess heat, and can experience what is referred to as a “runaway” condition if overheated or overcharged or, as has happened with some Tesla crashes, the battery cells are damaged. 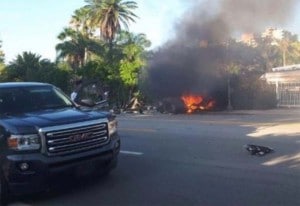 Most Tesla fires, like this one in Feb. 2018, have occurred during serious crashes.

Audi officials told TheDetroitBureau.com this week that they have taken a number of steps to reduce the risk of fires with its new e-tron battery-SUV. That includes a liquid cooling system to maintain ideal pack temperatures and a pack structure that functions much like the safety cells used to protect passengers in a collision. The idea is to transfer crash forces around the battery cells to reduce the risk of damage.

“Battery combustion is a very serious incident for consumers, and it could lead to consumer aversion to electric vehicles,” Automotive Energy Supply Corp., whose batteries power about 430,000 Nissan Motor Co. vehicles, told the Bloomberg news service. “We are determined not to cause serious accidents and put damage on the industry, and we believe that now it is more important to proceed with caution.”

Despite such concerns, Tesla CEO Elon Musk has, on several occasions, downplayed the risk of a battery fire noting the large number of gas- and diesel-powered vehicles that go up in flames each year. A study by the National Fire Protection Association found that 17% of all U.S. fires involve motor vehicles.

The fundamental problem with lithium-ion batteries is the flammable liquid electrolyte they use. There are a number of different types lithium chemistries and manufacturers have tried to balance safety risks with the need to maximize energy which varies between each of these “families.” Battery experts say the desire to reduce the flammability of today’s batteries is one of the factors driving the search for replacement technology. One thought particularly promising is known as the solid-state battery. It effectively replaces the flammable electrolyte with a solid ceramic material that doesn’t burn.

(“Do you think we’re S3XY,” Musk asks as Model Y rolls out. Click Here for more.)